Ditch the meat, save some bucks: East Coast vegans say it’s cheaper these days to fill your fridge with veggies

With the rising cost of food, especially meat products, many are thinking about turning to a vegetarian or vegan diet in hopes of saving some money.

But is a plant-based diet any better for the wallet?

Jessica Power, who lives in Grand Falls-Windsor in central N.L., says it most definitely is.

“I don’t know where the idea that eating vegan is so expensive came from. With the cost of meat right now, it would literally be impossible for me to eat any other diet than a vegan diet even if I wanted to,” she says. 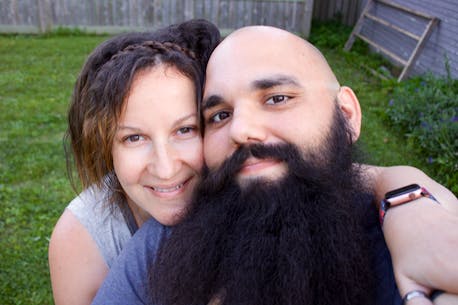 Power says a family member recently posted their meager grocery haul that cost them $175 and didn’t include enough ingredients for a complete meal.

Meanwhile, Power and her fiancé spent the same amount and had more than enough food for the week.

“It breaks my heart that people spend so much on so little food when there are other, better options available,” says Power.

Seana Collins says that although prices have absolutely gone up, living as a vegan in the farming community of Port Williams, N.S., she doesn’t believe she is experiencing the substantial raise in her grocery bill as her meat and dairy eating friends currently are.

However, Collins makes everything from scratch and buys in season and local. She says vegans who buy premade and processed foods will experience a substantial rise in their grocery bills, as nut milks have risen in cost substantially.

“If you consider the basis of my vegan diet is beans, pulses, legumes and local vegetables where available, my budget is very manageable,” says Collins.

The most expensive items in her grocery cart, she says, are fresh fruit and vegetables from areas of the United States like California or from Mexico. These food items have doubled in price over the last two years.

To combat the rising fruit and vegetable prices, Collins purchases a lot of frozen vegetables and frozen fruit. Although frozen items have risen in cost too, she says it’s nowhere near as much as the meat and dairy products she doesn’t eat.

Buying local helps. Living in a farming community with greenhouse growers who make produce like tomatoes, cucumbers, and greens available year-round has allowed Collins to keep her budget manageable.

Collins says most people who are not vegan don’t understand how simple it is to eat a vegan diet, nor is it as costly as one might think. It’s really just a simple formula of replacing the meat protein on your plate with a vegan protein. Begin by swapping one for the other, she says. Simple vegan recipes are easily accessible now to help out.

That’s why Collins is soon going to launch a new blog called Valley Vegans, which will focus on local in-season ingredients for simple, healthy family vegan recipes. She also documents her vegan food journey through her Instagram account.

Samantha Blizzard, a registered dietitian at the Atlantic Superstore in Charlottetown and Montague, P.E.I., agrees on the price savings.

She says eating a vegetarian diet can save you a ton of money with a bit of planning and preparation.

By choosing specific plant-sources of protein, consumers can save significantly, she explains. For example, she suggests using black beans as the protein source for a “Taco Tuesday” meal rather than ground meat. A can of beans costs under $2, while ground meat can cost anywhere between $10 to $20 per pack.

“There are certainly vegetarian foods out there that are more expensive,” says Blizzard. “However, there are just as many options that are budget-friendly – it’s all in the way you shop.”

Blizzard says you can save a lot of money by choosing vegan and vegetarian options that are in their natural form – think chickpeas, lentils, or tofu.

But the savings aren’t there with all vegetarian foods – if you’re choosing meat alternative products that are made to mimic protein for recipes, like vegan meatballs, vegan cheese, packaged veggie burgers, nuggets, or sausages, be prepared to spend more.

Blizzard encourages her clients to take advantage of the more cost-effective vegetarian protein options on the market to not only benefit their wallet but also their health. Learning how to use foods like beans, legumes, nuts, seeds, tofu, edamame, quinoa and more can be out of our comfort zone – especially here in Atlantic Canada where we eat a lot of meat and potato meals. But with a little practice and some tasty recipes, Blizzard says it is possible to enjoy these foods as part of your regular diet.

For example, Blizzard says to start by making simple swaps. Use edamame beans instead of chicken or beef in stir-fries, use canned lentils instead of ground beef in spaghetti and shepherd’s pie, or add hemp seeds to peanut butter toast, cold cereal, and oatmeal.

With more and more people turning to a plant-based diet, Blizzard says it is easier than ever to find vegan food right in the grocery store. You can find several options for vegan yogurts, cheeses and sour creams, she says.

If you’re looking for ways to reduce the grocery store bill, then start looking towards a more plant-based or vegan diet. With the growing season upon us, it’s easier than ever.

The NL Vegan Facebook group offers the following tips on how to save money living on a vegan or plant-based diet.

Buy in bulk – either dried, frozen, or canned. Stock up when things are on sale. Frozen food is just as nutritious and is often cheaper.

Make preserves. If you don’t mind putting the work in, you can pick and preserve lots of different berries and mushrooms.

Avoid simulated meat as it is highly processed and more expensive.

Find recipes through a go-to cookbook or blog. You need a good seitan recipe and a good veggie burger that you can freeze.

Chickpea flour is cheap and versatile.

Cook from scratch. Processed food is expensive. Having a stellar food processor is worth the expense, as is a mixer, a tofu press, and an immersion blender.

Stock up on the staples. Foods like lentils, tofu, beans, pasta, and oats can be some of the least expensive but most nutritious things in the supermarket. Bananas, potatoes, carrots, turnips, cabbage, and onions are some of the more affordable produce items.

Shop at Costco. Buying nuts and seeds such as chia, hemp, flax, etc., in large bags from Costco can be cost-effective. Tofu is also cheaper and you can also normally find Yves ground “beef” at Costco for a pretty good price too, which can be used to make tacos, Shepherd’s pie, or chili.

Learn to forage. The Newfoundforage group, and Newfoundland bushcraft groups have info in them on it and when they’re available.

Freeze your vegetable peels until you have enough to make vegetable stock – just make sure you clean the veggies before you peel them. Don’t throw the boiled peels away – you can compost them to make free vegetable stock with zero-waste.

Make it at home: Chickpea Salad

Add chickpeas to a medium-sized bowl and mash well using a potato masher. Mix in all other ingredients. Taste and adjust flavours as necessary. Serve on your favourite bread and enjoy!