Korean companies hope to take a slice of the vegan pie

Vegan food products that are on sale at a popup store in Lotte Department Store in Jung District, central Seoul from May 27 to June 2. [LOTTE DEPARTMENT STORE]


Korean companies are expanding their businesses into the vegan food market.

Lotte Department Store said Thursday it will open a popup store offering various popular vegan brands at its main branch in Jung District, central Seoul from May 27 to June 2.

Dubbed “Vegan Life Green Table,” the temporary store is being hosted under the theme of “healthy meals that save the earth.” Vegan products from different brands such as ALTist, a brand well-known for its meat substitutes, are being sold.

Vegan snack and home-meal replacement brands such as Organica, DJ&A and JUST Egg, and the oat milk brand Oatly are also on sale at the event.

A variety of meat substitutes including vegan jerky and plant-based tuna are sold by ALTist, a local brand formerly known as Biomixtech, at the popup store.

DJ&A, a food company based in Australia, joined the event and is selling crackers and chips made out of vegetables and fruits such as peas, mushrooms, potatoes and mangoes.

“Vegan food is something beyond a new culture of food. It is becoming a lifestyle and we will continue to find new vegan foods,” said Han Wook-jin, leader of the processed food team at Lotte Department Store. 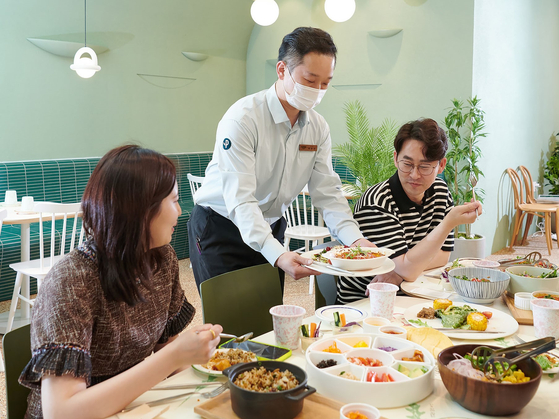 
Other local food companies have opened vegan restaurants to keep up with the trend.

The restaurant runs on a reservation-only system and offers lunch and dinner set menus.

“The restaurant will especially be popular with people in their 20s to 40s as they tend to prioritize sustainable consumption and desire to experience new things at the same time.”

The restaurant offers 13 dishes made of plant-based proteins and meat alternatives.

Soy bulgogi deopbap (mixed rice with grilled and marinated plant-based beef) and tofu skin lasagna are some of the dishes on offer.

As well as catering to the surging vegan population, companies look to vegan business as a way to achieve their environmental, social and governance (ESG) goals.

According to the Korean Vegan Union, the vegan population in Korea surged by more than 10-fold to approximately 1.5 to 2 million over the last decade.

“As the so-called MZ generation (millennials and Generation Z) is showing great interest in issues such as health, environment and animal protection, the term veganism was coined,” said a spokesperson for Lotte Department Store.

“The vegan trend is making a huge impact on the food culture of our society.”

Lotte Department Store projects the plant-based food product market will grow by over 50 percent every year and that the global alternative food market volume will surpass 8 billion won by 2025. 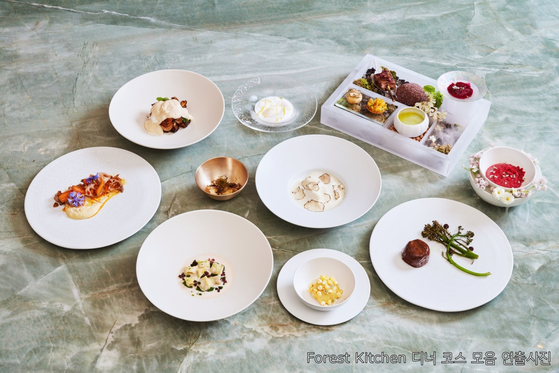 Some of the dishes available at Nongshim’s vegan restaurant, Forest Kitchen, which was opened on May 27. [NONGSHIM]

‘Veg-Fest’ Vegan Festival to sprout in Orlando this weekend

The Ultimate Fast Food Guide for Vegans and Vegetarians