Investigators found millions of dollars in cocaine after witnessing a hand-off of a duffel bag full of the stuff outside Winter Park vegan restaurant Ethos Vegan Kitchen.

According to an affadavit, investigators from the Department of Homeland Security were following Wayne Stout, Jr. as part of an investigation into money laundering. In the process of tailing Stout, they say they watched him rent a car, pull several coolers and bags out of an Orlando storage unit on Edgewater Drive and hand one bag off to another man in the parking lot of Ethos.

When they followed that man, identified by authorities as 55-year-old Avery Lans, he began driving erratically. They believe that Lans was attempting to evade possible pursuit by police or anyone else who might be following him. At some point, Lans tossed the bag out of the car. The bag was found to have nearly 12 pounds of cocaine inside it.

Further investigation of the storage unit found 109 additional kilograms of cocaine. The police value each brick at around $30,000. Both Stout and Lans have been arrested.

Government exhibits in the case against Lans include a map with the location of Ethos in Winter Park, and a pardon of Lans from the governor of the U.S. Virgin Islands that appears to have been folded up and carried (possibly in a wallet?) for many years. Lans was convicted of second-degree murder in 1991. He served 25 years of a 40-year sentence before being released. The pardon was issued in 2014, after Lans’ release, restoring all of his rights. 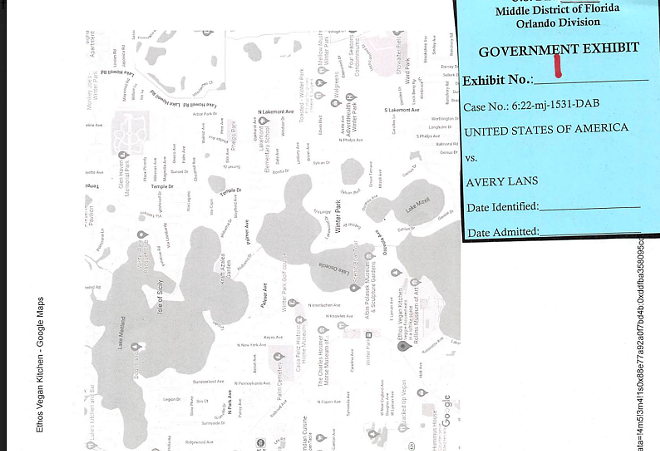 An exhibit in the case against Lansthat shows the location of the hand-off. 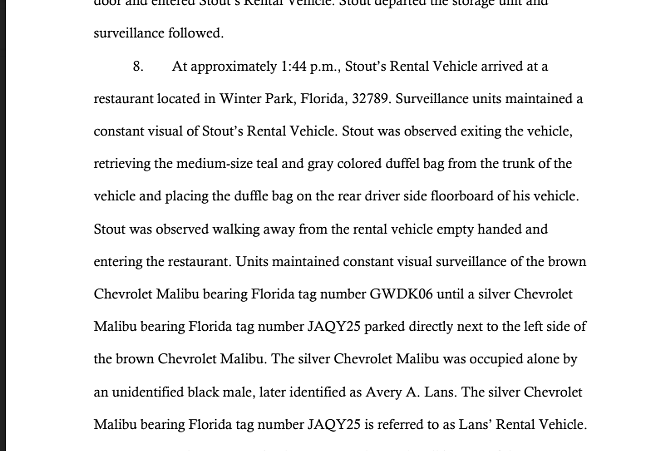 The criminal complaint against Wayne Stout, Jr. and Avery Lans describes the hand-off in Winter Park.