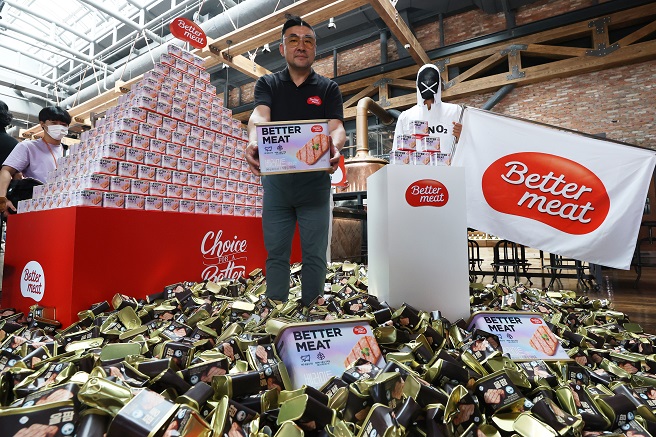 Shinsegae Food had so far supplied its cold-cut ham business through such channels as Starbucks coffee chain or at staff cafeterias of SK hynix after launching its plant-based meat alternative brand called Better Meat in July last year.

The vegan canned ham is animal-free and made of ingredients such as vegetable oil and soy. It is also free of sodium nitrite — a food additive used to create the pink hue of preserved meat.

The new product will be made available to retail customers starting next Monday at “The Better” pop-up store, located in Apgujeong of the posh southern Seoul district of Gangnam, the company said, adding it will later expand the product to other channels in the near future.

“I am not asking the audience here to stop eating meat. What we are suggesting is a healthy ‘alternative’ to existing animal meat offered in the market,” Shinsegae Food CEO Alex Song said in a press conference in southern Seoul.

He said Shinsegae Food’s main target is the overseas markets, where processed meat, like ham and bacon, is commonly consumed at the dinner table.

Shinsegae is set to open a wholly-owned U.S. subsidiary for plant-based protein alternatives next month.

“When Tesla introduced the electric-powered vehicle, it caused waves of discomfort among traditional car makers, but now even Porsche makes EVs. We want to encourage other food companies to join in the food revolution sparked by Better Meat,” he said.