Earlier this summer, New Paltz’s well-known vegan cafe and ethical chocolatier, Lagusta’s Luscious, went on hiatus as the brand took time to morph into its next iteration. To the average passerby, the shuttering of vegan cafe the Commissary on Church Street in June, followed by the closure of Lagusta’s Chocolate Shop on North Front Street might’ve seemed to signal the end of an era. But plenty of projects have been in the works, bubbling just below the surface.

When One Door Closes…

For seven years, the Commissary served up tasty drinks and plant-based small bites. “We just couldn’t continue operating with the high overhead that we had at the Commissary space—the food menu was a loss leader,” says founder Lagusta Yearwood. “Sadly, we’re one of the many thousands of independently operated food establishments who realized during the pandemic that the way the food service world is run is not sustainable.”

Lagusta’s North Front Street chocolate shop also went quiet. But a short month later, the brand was back on the block, just a few doors down in a streamlined storefront called Lagusta’s Luscious Cafe. “Even though I loved the small food menu [at the Commissary], it’s time to focus on our confections and drinks program, which are sustainable in the long term—as well as super-high quality, and delicious,” Yearwood says.

For Yearwood, the business evolution that led to the new location was not necessarily of the bigger-is-better persuasion. It was more focused on continuing to develop a warm, accepting community; offering staff more room to do what they love; and creating a comfortable space where regulars can pause, perhaps a few minutes longer, in the Lagusta’s universe.

The community board and mitzvah wall, major signatures of the Commissary, are traditions that will proudly continue at Lagusta’s Luscious Cafe on North Front Street. From their notable chocolate Flaming Vulvas or decorative Pride Bars to the “Militantly Vegan” totes and the current Sweet Geode collection, the wonderful world of the Hudson Valley is represented in Lagusta’s product selection.

At the new spot along the rail trail on North Front Street, Lagusta’s teal and brown color palette has given way to a gold-and-green logo refresh. The interior has been tailored to accommodate dine-in guests looking to sit and savor for a while, as opposed to the grab-and-go model the shop employed since 2011. It will feature some of the fan-favorite drinks and small bites that were so beloved at the Commissary as well as sweet treats from Kingston-based Sweet Maresa’s and savory pastries for other area vendors. The popular vegan bakery Sweet Maresa’s is a fixture of Uptown Kingston, with its creative, pastel-hued window displays and perfectly dressed macarons. Yearwood and Maresa Volante have not only been friends but business partners since both sweet spots landed in the Hudson Valley over a decade ago. In addition to their respective upstate endeavors, together the pair own Confectionary! in the East Village.

Just as the North Front Street cafe represents streamlined front-of-house operations, Yearwood is also refining her back-end operations. In the fall, chocolate production and shipping operations for Lagusta’s will move to a large facility near the thruway, just in time for the brand’s 20th anniversary. And, if that’s not sweet enough, Yearwood has joined with a few others to launch Softer Power Sweets, which will produce vegan CBD caramels to start, moving into THC edibles as New York laws allows. For years, people had asked Yearwood about moving into the cannabis edibles space. And as the legislative landscape and business ecosystem aligned with that possibility, Yearwood realized, “I love plants, the Earth, and candy. Why not?”

Chocolatier Shana Napoli, marketing manager Ericka Wadleigh, and Yearwood’s partner, Mike McGregor, along with cannabis growers Amy and Gail Hepworth of Hepworth Farms plan to ramp up operations starting August 11. “There have been a lot of steps and hoops to jump through, but we’ve done it,” Napoli says. “We worked super hard to pass a GMP [good manufacturing practices audit] and are extremely proud of that.” 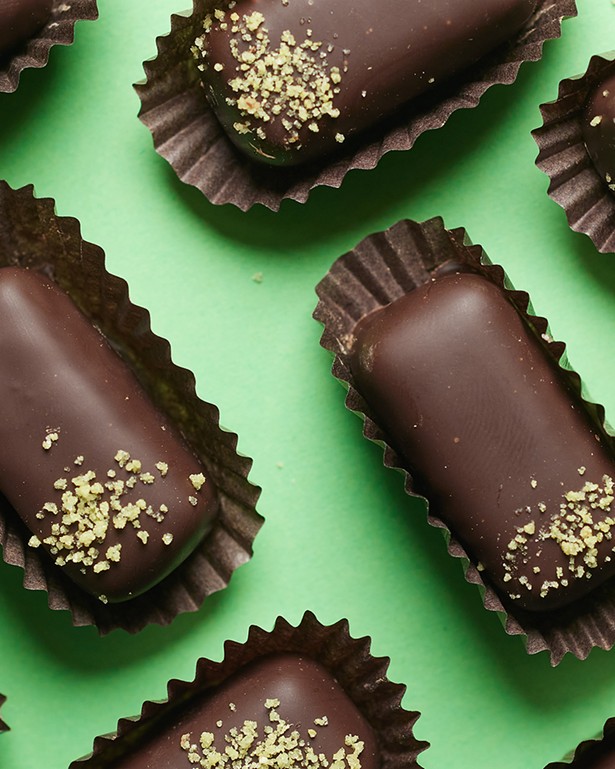 Politics and chocolate don’t necessarily mix as easily as cocoa beans and sugar, but at spaces run by Yearwood and her team, the two are a sweet, symbiotic confection. The world she has created delivers delicious treats—but not mindless indulgence. At every turn, we are asked to think about what we put in our mouths, where every ingredient comes from, and whose hard-working hands are behind the mixing and molding.

In her 2019 vegan cookbook, Sweet & Salty, Yearwood writes, “I use two principles informed by anarchism daily in the business: 1) the starting point of any decision should be informed by more than just capitalist principles; and 2) organization without repression, which is to say: we can run efficiently and well without repressing those around us.”

Yearwood has always made care a priority in her operations—care for the planet, for her employees, for the final product. Therapeutic edibles are just the next manifestation of this thoughtful approach to business. Soft Power Sweets will be available online, at Lagusta’s Café, and at Confectionary! in Manhattan.