I practically grew up in New York. Summers in Crown Heights at a Chassidic day camp, followed by years living in a room infested with cockroaches, and then a cramped basement apartment while attending high school. By the time I moved to Brooklyn just after my 19th birthday, I knew the city like the back of my hand. It was both my past and my fresh start after aging out of the foster care system. The city has a way of toughening your skin and building character as you struggle to survive.

After a few years with my head down trying to make a name for myself in the automotive industry, I met my beautiful wife, Jodyann Morgan.

We eventually moved to the Midwest, hoping for the opportunity to buy a house and build our own little slice of heaven. When we left Brooklyn, we had almost nothing — a car packed with suitcases, boxes and a plastic container with our adopted tortoise. Coming back as a travel columnist, my trusty baby blue Monos suitcases in tow, with invitations and access, was much weirder than either of us expected.

We had a grand time enjoying the finer things the city offers, spending most of our time in Manhattan. While I can go on for hours about the life we had while we lived there, this story is about the present, not the past. Let’s talk about experiencing some of the glitz and glamor that NYC has to offer and can be enjoyed at any size.

While New Yorkers try to stay far away from Midtown unless they don’t have another choice, tourists flock to the brightly-lit and slightly chaotic destination. If you’re staying in Midtown, the Conrad makes an excellent and luxurious home-base. Walking into the hotel feels glamorous all on its own, brought home by the top-notch customer service of all the staff we encountered during our stay.

The suite we stayed in was quite large, at least by NYC hotel standards, with the biggest gold-trimmed mirror in the entryway I’ve ever seen in a hotel room. The room features large windows that allow lots of natural light into the space, but as expected in New York, there is not much of a view besides the neighboring windows. Crisp white linens line the bed, which is wicked comfortable, and the air conditioning is controlled in the room, allowing you to set the temperature to your liking. And best of all, the water pressure is fantastic! You’ll enjoy every moment you spend in the room between adventures.

Quick Tip: If you’d love to stay at the Conard but aren’t interested in Midtown, the Conrad has another location downtown.

Where to dine: Benjamin Steakhouse Prime

The Benjamin Steakhouse is dripping with old-school charm. Founded by two former Peter Luger employees, who both happen to be named Benjamin, the steakhouse is expectantly luxurious, dim and has the slightly noisy vibe of a traditional steakhouse. You’ll dine in a spacious dining room with a remarkably high ceiling, at tables covered in white linen and surrounded by comfortable, armless chairs. There’s also an outdoor patio.

The kitchen is also run by former 20-year Peter Luger veteran chef Arturo McLeod, who shines in areas where Peter Luger doesn’t quite excel (like sides and apps and seasoning…).

We started our meal with oysters and lump crab, with all the fixings, which were presented beautifully and tasted amazing. It was followed by steak for two, a perfect medium-rare, dry-aged porterhouse with a beautiful crust — pre-cut for easy eating. It was accompanied by asparagus prepared in the method we preferred: pan-fried.

There was also a gooey, cheesy macaroni and cheese. The waitstaff serves the food family-style and they are quick to refill your plate as you finish. Everything was simply perfection.

Seafood has always been a favorite of mine. Fried, raw, grilled, baked — pretty much anything that has fish is my jam. And a meal at Vestry is a master class in seafood of every variation. Their selections are bright, packed full of flavor and are simply divine.

The restaurant has a well-deserved Michelin star (and it happens to be my personal favorite Michelin-starred restaurant, which is saying a lot).

The dining room is lined with floor-to-ceiling windows and is decorated simply, with round wooden tablecloths adorned with small candles and elegant tableware. The atmosphere is both luxurious and lively.

Dinner started with crusty hot bread served with miso butter that melted on contact. The menu features bites, which are finger food-size, small plates and large plates, in addition to dessert.

The bigeye tuna tartare is served on a fish-shaped potato chip, which creates a beautiful textural experience. It was served alongside other bites, including a shitake hand roll with koshi rice wrapped in a wasabi leaf.

In addition to the menu, Vestry offers a caviar service, which is simple — highlighting the flavor bomb that each little caviar pearl is — and served with crème fraîche and potato blini. Small plates we tried included a melt-in-your-mouth Cchūtoro with yuzu, fresh wasabi and watermelon radish.

While not every great restaurant has desserts that are up to the caliber of the rest of the menu, Vestry is not like any other restaurant. Definitely leave room for the chocolate tart with passionfruit and cacao nibs.

Our main course featured the only meat on the menu, wagyu beef with Trumpet Royale mushrooms, potato purée and a miso-mustard, which was just as expertly prepared as the rest of the menu.

While not every great restaurant has desserts that are up to the caliber of the rest of the menu, Vestry is not like any other restaurant. Definitely leave room for the chocolate tart with passionfruit and cacao nibs.

Korean barbecue restaurant Yoon Haeundae Galbi was founded by Bobby Yoon, the grandson of the Korean chef who pioneered the “Haeundae Cut” to tenderize meat, which is used on all the grilled short ribs at the restaurant. In his grandfather’s restaurant in Korea, they grilled meat tableside over charcoal, but NYC regulations don’t allow that, so a gas grill is used.

“Although our restaurant in NYC is a contemporary recreation of the restaurant in Busan,” their website reads. “The traditional roots that Yoon Haeundae Galbi are built on remain intact.”

The restaurant — with its wood- and stone-accented walls and high ceilings — is visually stunning.

We ordered the prime meat package, which included two different kinds of short ribs, brisket and a dry-aged ribeye, in addition to banchan, small side dishes to enjoy with the meat. The meat was expertly cooked at the table as we watched, lest we overcook or mistreat it. We rounded out the feast of grilled meat with potato noodles cooked on the grill with some of the leftover fat and an added broth. Dessert was a refreshing Asian pear sorbet with cinnamon date punch — the perfect light end to a sensational meal.

For a quick lunch when you have a hankering for a different kind of barbecue, stop by the fast-casual joint Pure Grit. Located just blocks from Madison Square Park and right outside of Baruch College, the just-opened restaurant features a full vegan menu that’s also gluten-free.

I’m not vegan (so I may have a slightly different idea of what amazing barbecue tastes like), but I did fall in love with their “chicken” sandwich, made with Daring plant-based chicken served open-face on a crunchy corn-based waffle. That was topped with pickled red onion, pickle slices and coleslaw, before being sauced with hot maple syrup and a barbecue ranch dressing.

Things to Do: Burlesque Show by Company XIV

Feeling spendy? Splurge for tickets to Company XIV’s burlesque show. The dimly lit, incense-scented venue is located in Brooklyn’s Bushwick neighborhood, which is easily accessible by train from most areas in the city. You’ll be greeted by members of the company in full costume, so once you walk through the door, it feels like you’ve been transported to another — more sensual and mysterious — world.

The show itself was two hours long with several intermissions. Over that time, a carefully-constructed story was told through jaw-dropping aerial acts and different styles of dance. This is an immersive experience you won’t quickly forget.

Squish factor: Morgan and I found the couches, which are intended for two, to be quite small for the two of us together (Morgan wears an American size 18 and I am a size 24-ish). We were able to make it work, but it was quite a bit uncomfortable.

Getting a tattoo can be a big, life-changing decision, especially if you’ve never gotten a tattoo.  At Ephemeral Tattoo, that decision is made easy, due to a unique, proprietary ink to create very real but temporary tattoos that disappear in nine to 15 months. I have quite a few traditional tattoos, so I decided to get a tattoo of something fun that I wasn’t sure I wanted to ink on my body permanently: a dolphin jumping over my belly button. 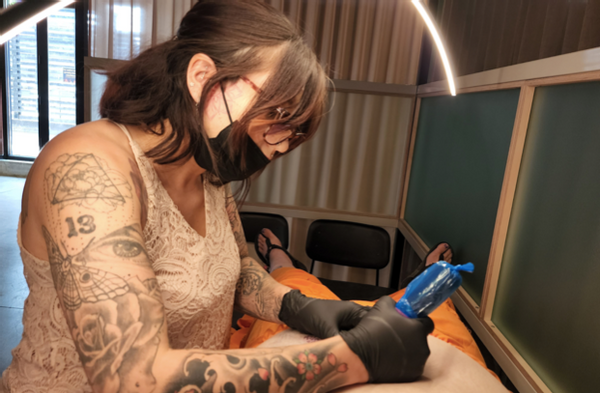 Getting a tattoo at Ephemeral (Jodyann Morgan)The tattooing process is virtually the same, although traditional shading isn’t an option. Instead, Ephemeral uses a dotting technique to accomplish a shading-like effect. While I had a great experience, I think that I’d personally spring for a traditional tattoo next time. But if you’re wanting a temporary tattoo during your visit to New York City, make sure to get on the waiting list well in advance or you might not get a slot.

Squish Factor: If you’re worried about getting a belly tattoo, let me reassure you. The tattoo process was nearly painless. I have both arms tattooed, as well as my shoulder and my shin. Getting my “fat stomach tattoo” was the easiest, least painful tattoo I’ve ever had.

I highly recommend booking an appointment at Adriana Hollow Tattoo for hyper-realistic, vibrant color work and highly detailed tattoos. I planned my entire trip around getting a large tattoo on my forearm from Adriana, who’s been tattooing me for over 6 years and is responsible for most of my ink.

Adriana is a queer tattoo artist who is actively an ally to fat people. She loves how tattoos help people feel beautiful and reclaim their bodies after trauma, which is why she particularly enjoys doing scar cover-ups. Adriana’s work is adored, so she stays extremely busy. If you’re looking to book an appointment, follow her on Instagram for notifications for when her books open, typically in March and September.

Squish Factor: Adriana tattoos at a studio that requires walking up the stairs. If this is not accessible to you, be sure to reach out to her, and she’ll see if another option is available for the dates you’re looking to book.

Can I admit something that might get my “foodie card” revoked? I don’t really like pizza, minus very few exceptions. I found one of those exceptions while taking the Greenwich Village Food Tour from The Tour Guys. It was a simple slice from Bleecker Street Pizza that was pretty perfect. This is one of the many reasons I love taking food tours!

This tour includes so much more than good pizza. You’ll try a naan “taco,” stuffed with your choice of protein ranging from paneer tikka masala to lamb curry and salmon pakora. There’s customizable macaroni and cheese and cannoli. The tour guide weaves together the dishes of the day with the history of the neighborhood, stopping to point out sites and stoops that contribute to the story. The pace is relaxed and the distance is shorter than many other tours I’ve taken.