Vegan activists stage sit-in at grocery stores across the country

Vegan activists have staged sit-in protests in the dairy aisles of supermarkets in four cities weeks after sparking outrage for pouring milk all over the floor of Harrods.

The Animal Rebellion demonstrators are calling on major distributors to stop selling animal products and by-products.

On Saturday, the group shared photos of protestors at Whole Foods in Kensington, London, and Marks & Spencer‘s stores in Southampton, Birmingham, and Manchester.

The move comes almost four weeks after everyday vegans turned on the group for ’embarrassing the cause’ when they were forcibly removed from Harrods for the ‘foolish’ milk-pouring stunt.

They’ve vowed to disrupt the dairy industry daily in September as part of a push to ‘stop the supply of dairy’ and make a ‘plant based future possible’.

‘This September, hundreds of people are putting themselves on the line risking arrest again and again to stop the supply of dairy,’ the group said in a call to action earlier this week.

‘A bottle of cows’ milk is representative of everything wrong with our food system,’ an Animal Rebellion spokesperson said in a caption alongside the photos.

‘From animal exploitation to environmental degradation, it is cruel, inefficient and unnecessary product.’ 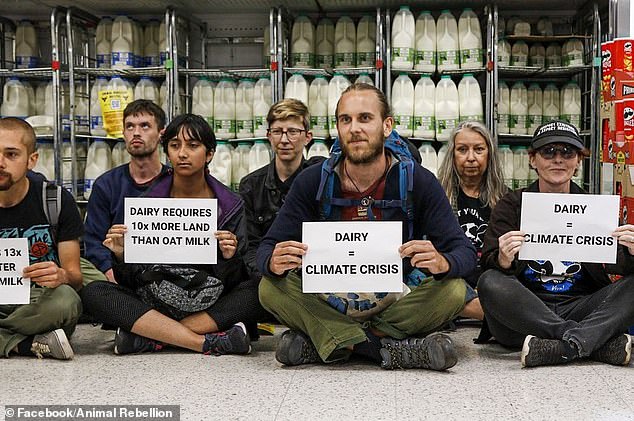 On Saturday, the group shared photos of protestors at Whole Foods in London, and Marks & Spencer’s stores in Southampton, Birmingham, and Manchester 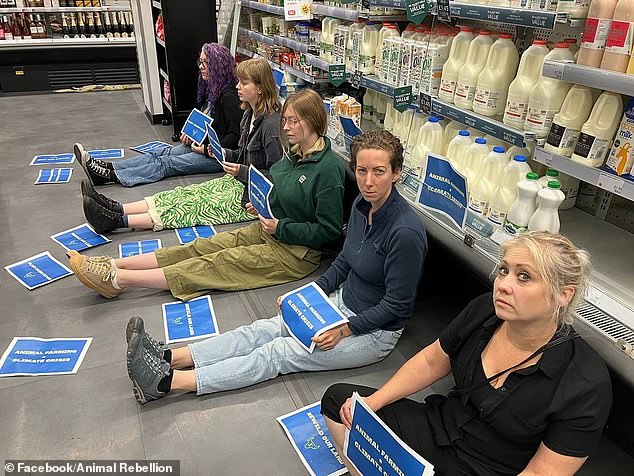 The group attracted criticism online for disrupting customers’ shopping, with one person saying: ‘I’d argue that blocking dairies and abattoirs is a more effective and popular tactic.’

‘Targeting the so called little people will never end well. We have to punch upwards instead of downwards.’

But others jumped to the group’s defence by arguing consumers prop up the entire industry by repeatedly purchasing animal by-products.

‘They need to be targeted and educated,’ one person said. ‘No consumers = no industries.’ 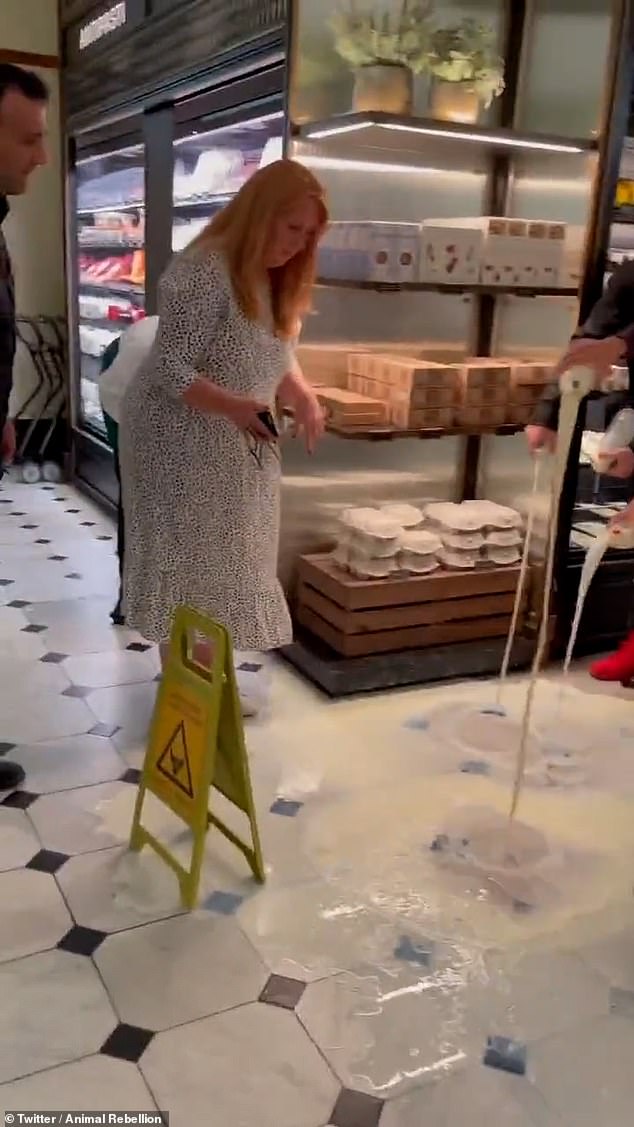 On August 9, the group poured the milk out the cartons one-by-one, and a woman (pictured) can be heard saying, ‘why are you doing this? It’s disgusting’

One demonstrator, Max, told Metro he felt he had no choice but to join the sit-in at Marks & Spencer Manchester.

‘This is not how I want to spend my weekend, but as the Government is failing to respond to our climate, ecological and moral crises, I no longer feel I have a choice.

‘Earlier this summer more than 60 homes and businesses burnt down when Britain faced record-breaking temperatures and now one-third of Pakistan is underwater from extreme climate-induced flooding.’ 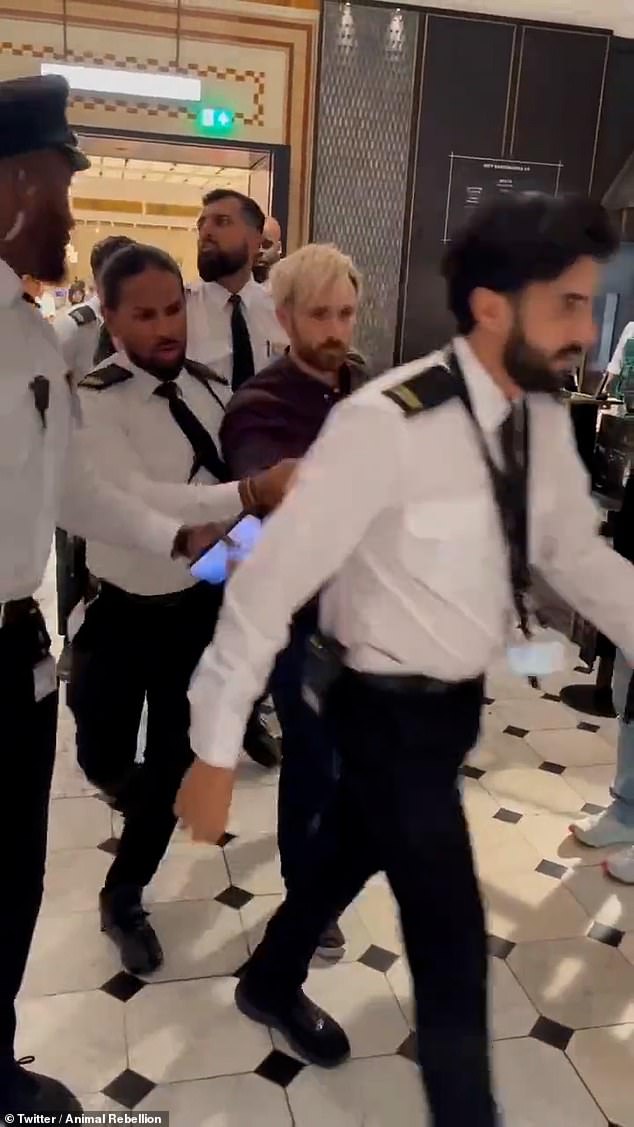 Security had to forcefully remove the protestors, who chose Harrods to protest in as the luxury department store as ‘it is a symbol of the broken system we are living in’

On August 9, the group were slammed by the public and even other vegans for their disruptive and ‘foolish’ stunt inside Harrods – where they poured milk all over the floor of the food hall.

Twitter users pointed out that the protestors – who also staged sit ins at other supermarkets and cleared shelves of milk and dairy products – were only making ‘a mess for the cleaners to clean up’ and making it ‘dangerous for disabled customers’.

One said: ‘You didn’t hurt the dairy industry here, you gave them a large new order.

‘You hurt the workers at the store (who may be punished for the cost of the new order), you hurt poor and food insecure customers, you made it dangerous for disabled customers.

‘What is wrong with you?’

Another said: ‘Why do you clowns always make trouble for the working classes, never your own?’