23 Vegan Mac and Cheese Recipes You Need to Try

Taste buds evolve as we age and palates become more refined with experience, but there is no such thing as aging out of mac and cheese. Of course, chefs have enhanced the childhood classic by adding glugs of truffle oil or crispy vegan bacon, but the fact that this comforting pasta dish can go high or low speaks to its universal appeal.

How to make vegan mac and cheese

Home cooks who prefer to make this dish from scratch often rely on a blend of cashews, potatoes, squash, carrots, plant milk, vegetable stock, and/or nutritional yeast to create the perfect cheesy sauce.

Whether you crave stovetop or casserole-style, elbow or rotini-shaped, these 23 vegan mac and cheese recipes are all you need at this moment.

If you’re searching for vegan mac and cheese recipes, you’re going to find that the majority contain nuts. This awesome recipe is perfect for those individuals who suffer from an unfortunate nut allergy.
Get the recipe here 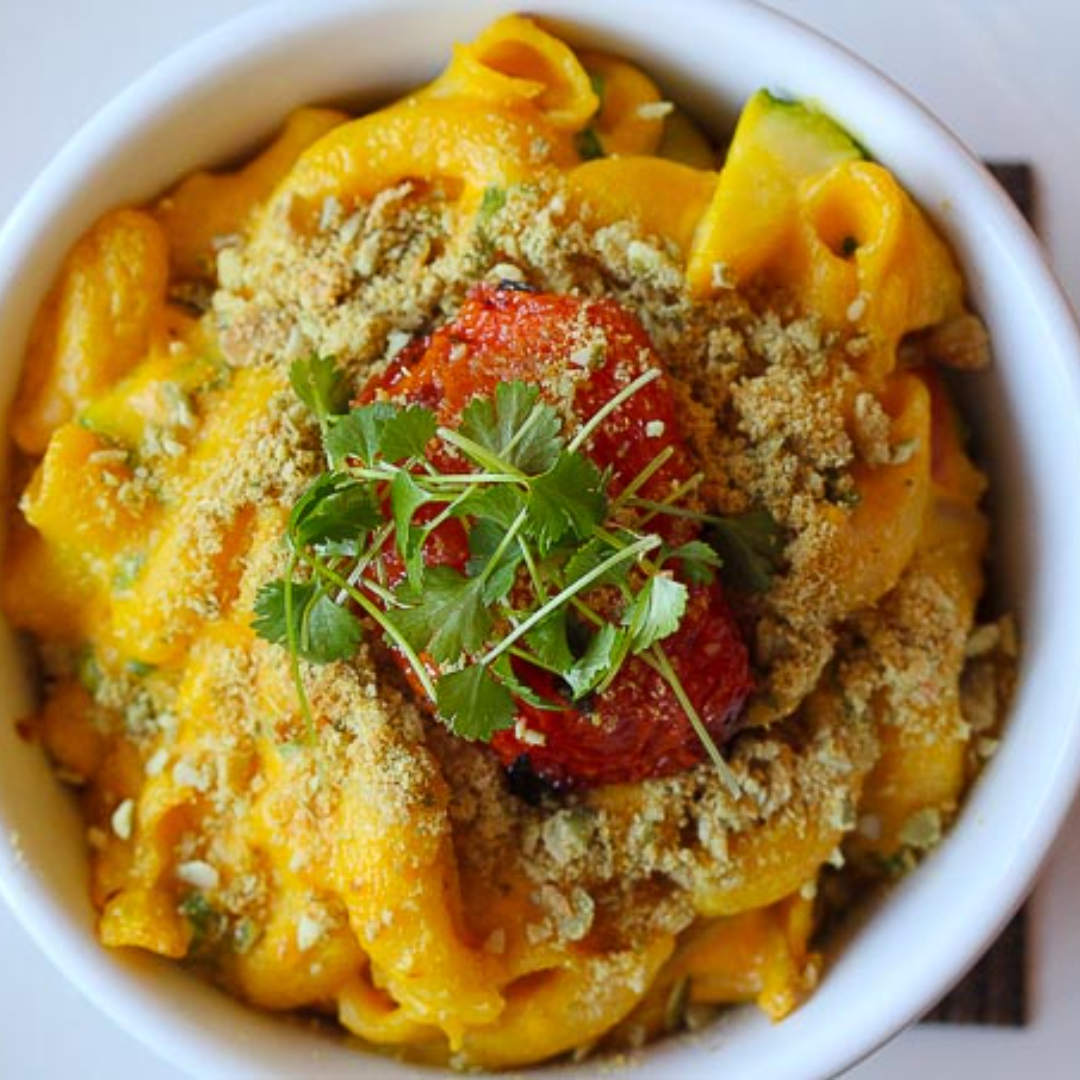 This recipe deserves a shot, even if you’re not gluten-free. The secret is the super velvety cashew-based cheese sauce. Whip this up over the stove and you’ll go from craving to comfort in under 45 minutes.
Get the recipe here 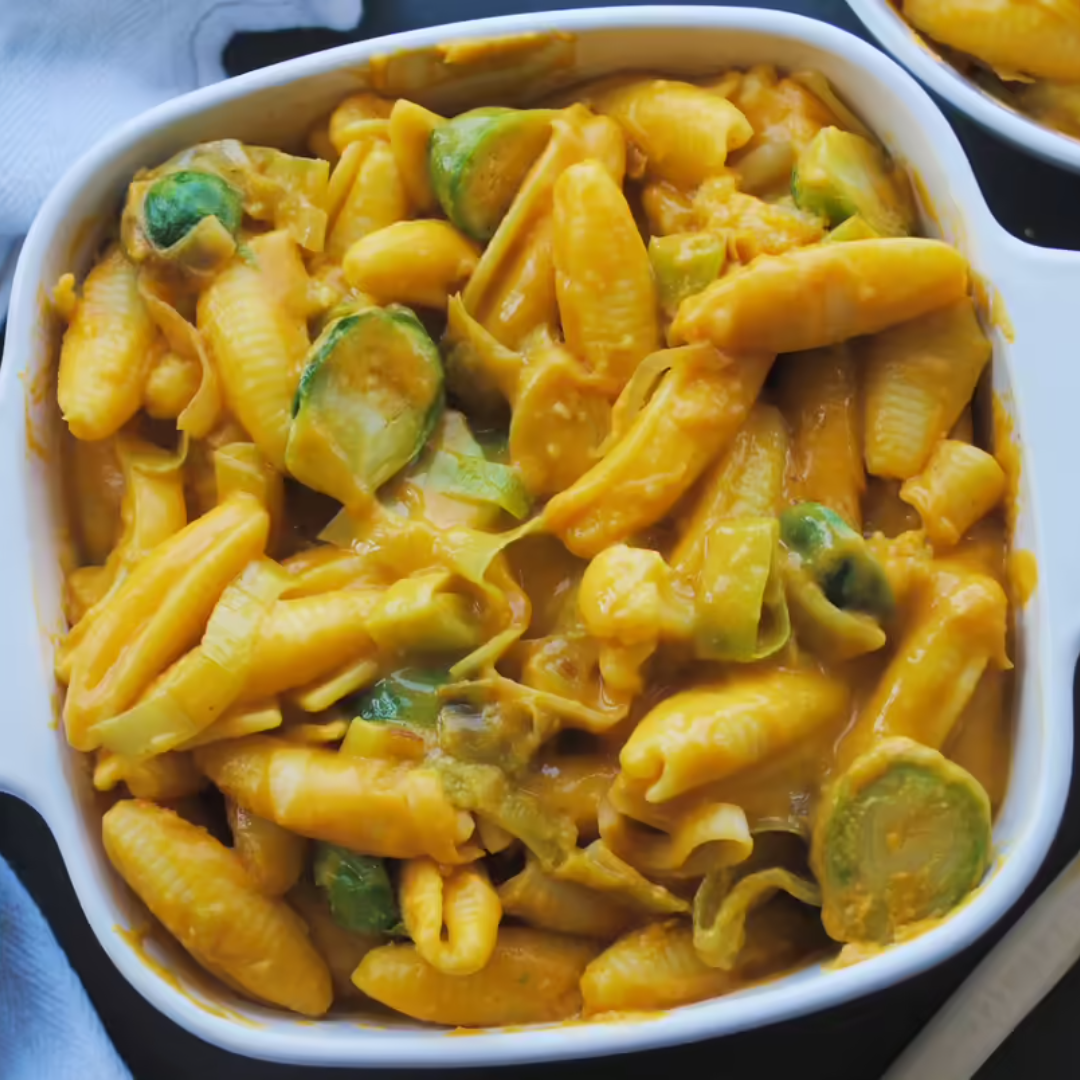 When you start with an exceptional vegan cheese, odds are your dish is going to turn out. This recipe combines Miyoko’s mozzarella with nuanced flavors including white miso, coconut milk, yellow mustard, and hot sauce for a truly complex and satisfying pasta dish.
Get the recipe here 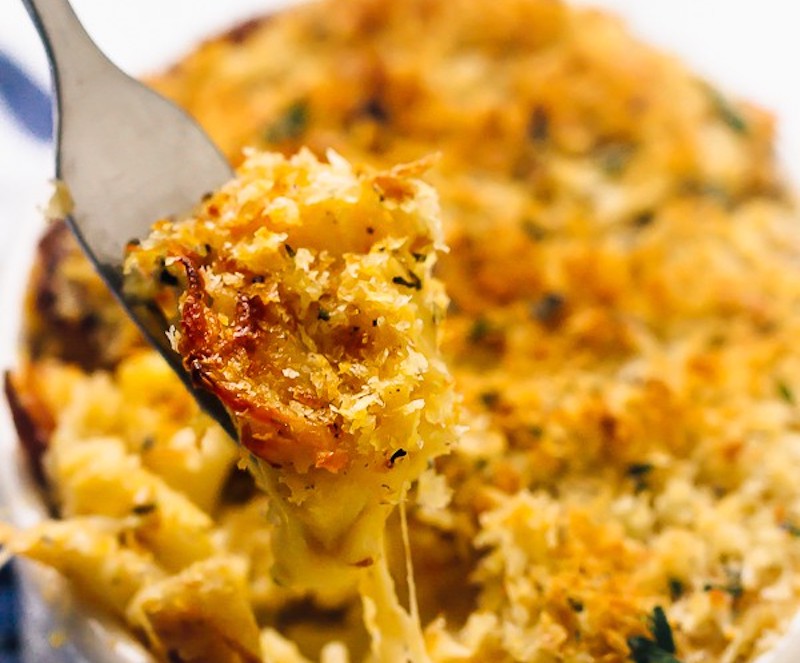 Jessica in the Kitchen

Not only is this a fantastic recipe, it only requires one pot, just like the boxed version. For some reason, squashes like pumpkin work so well in vegan cheese sauce. PSL season or not, give this one a go tonight.
Get the recipe here 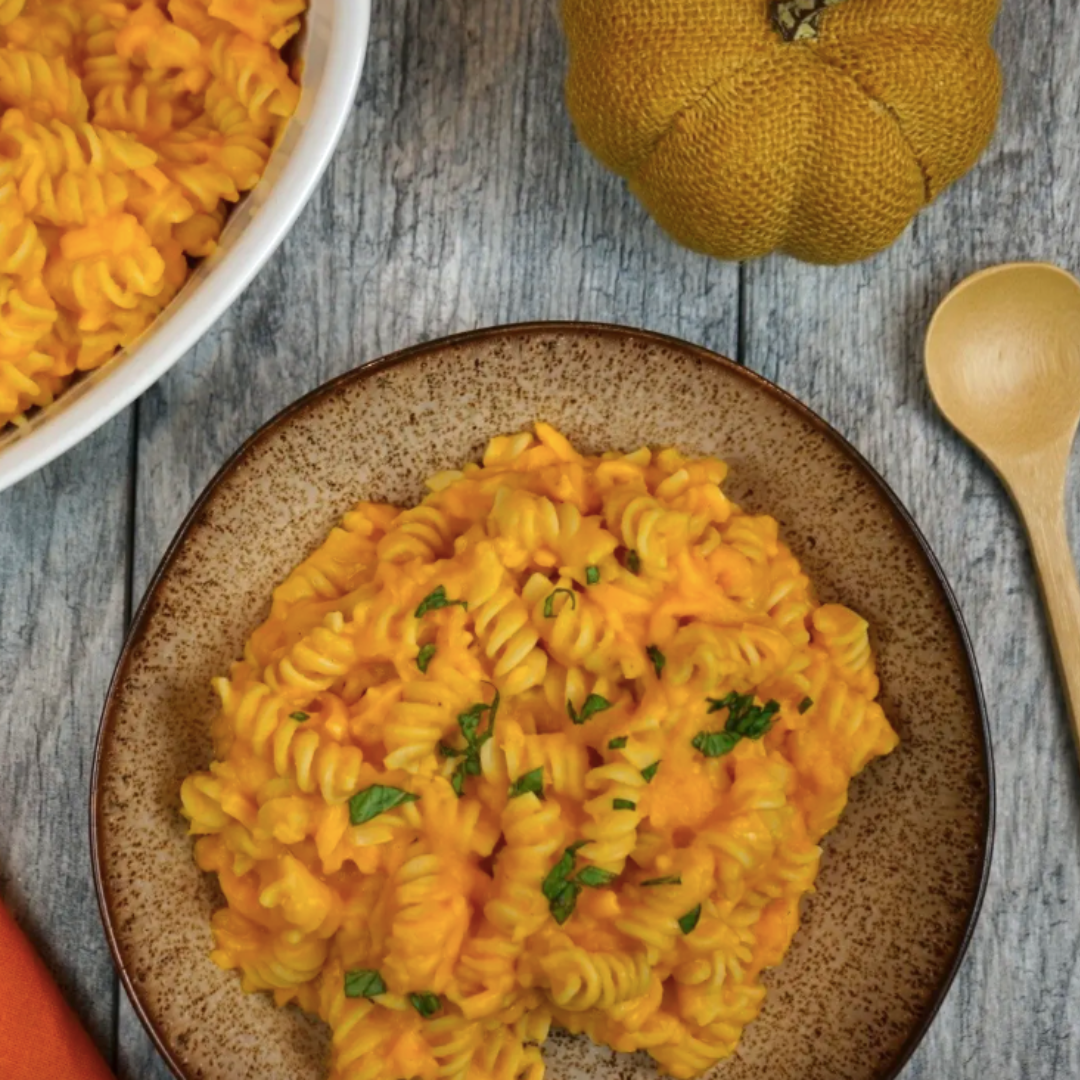 5Butternut Squash Mac and Cheese by The Vegan Rhino

If you don’t have rotini pasta on hand, you’ll want to purchase a box for this recipe. This noodle’s spiral shape clings onto the sauce which allows for every bite to burst with cheesy goodness. Be sure to pay attention to the chef’s tip at the bottom of the recipe for a quick vegan sage butter sauce to top your pasta.
Get the recipe here

6 Mac and Cheese by Tabitha Brown

Tabitha Brown has mastered vegan macaroni and cheese, and now, she’s sharing the secret to her next-level mac, and it’s all in the sauce. The actress and social media sensation starts off with potatoes, nutritional yeast, cashews, and vegan cheese shreds. Butternut squash helps her achieve the signature, bright hue of classic mac. Check out the full recipe on TikTok.
Get the recipe here 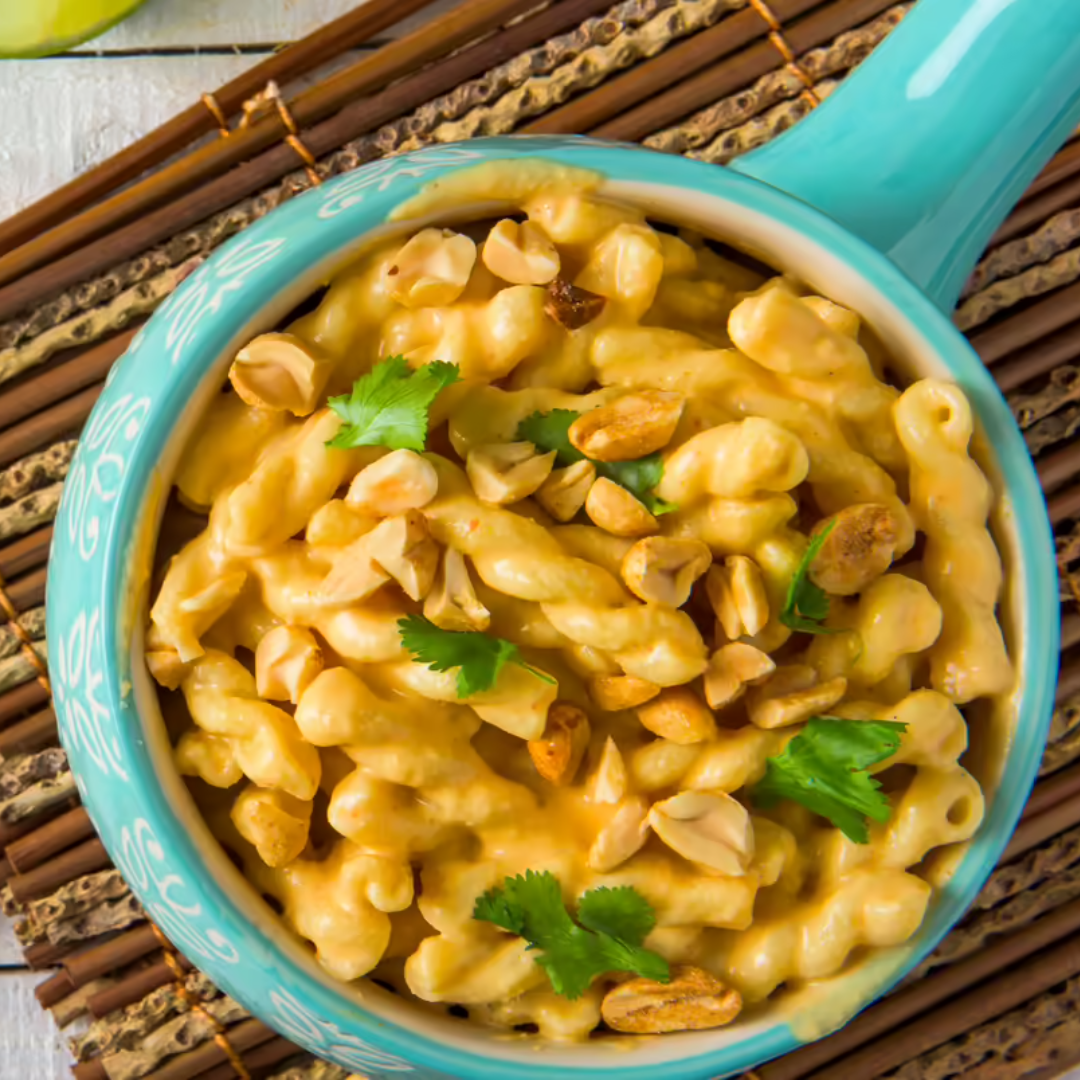 If you like curry, you’ll love this cheesy pasta mashup. The smooth coconut milk-based sauce is flavored with Thai red curry paste and topped with roasted peanuts, cilantro, and Thai basil. It’s unexpected, but delicious all the same.
Get the recipe here

8Baked Potato Mac and Cheese by Plant-Based on a Budget

This dish is the definition of carb-on-carb-on-carb. The recipe calls for mixing mashed potatoes with sauce-laden pasta and topping with breadcrumbs. How does it taste?  Like the love child of cheesy potatoes and baked mac and cheese.
Get the recipe here 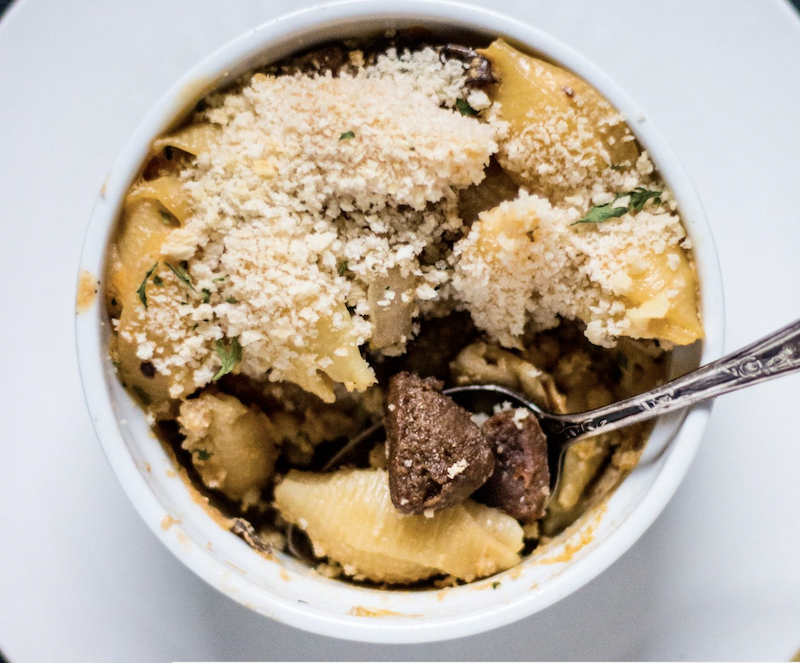 No shade thrown to the actual Philly cheesesteak, but this pasta rendition might be better than its muse. It comes together quickly thanks to store-bought vegan cheese and meat, so all you do is dump, stir, and bake. It really helps to lift the spirits after a stressful workday.
Get the recipe here 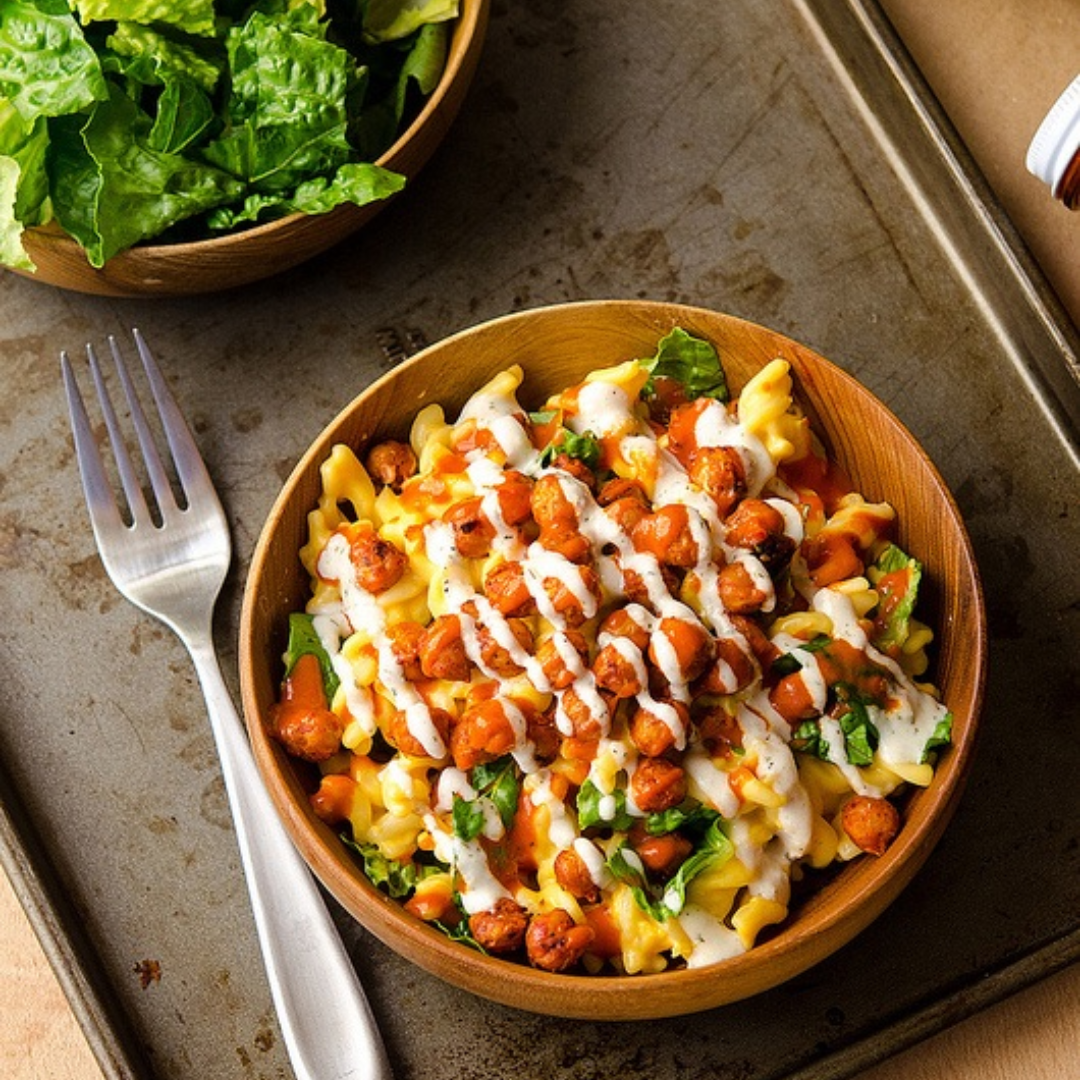 There are a lot of components going on in this dish, but the end result is so worth it. The flavor combination is akin to a mashup of vegan buffalo wings and mac and cheese. Gooey, cheesy pasta sits on a bed of crisp romaine then gets topped with crispy, buffalo sauce-basted chickpeas and a drizzle of vegan ranch. It’s not a symphony of flavors and textures—it’s a rock concert.
Get the recipe here 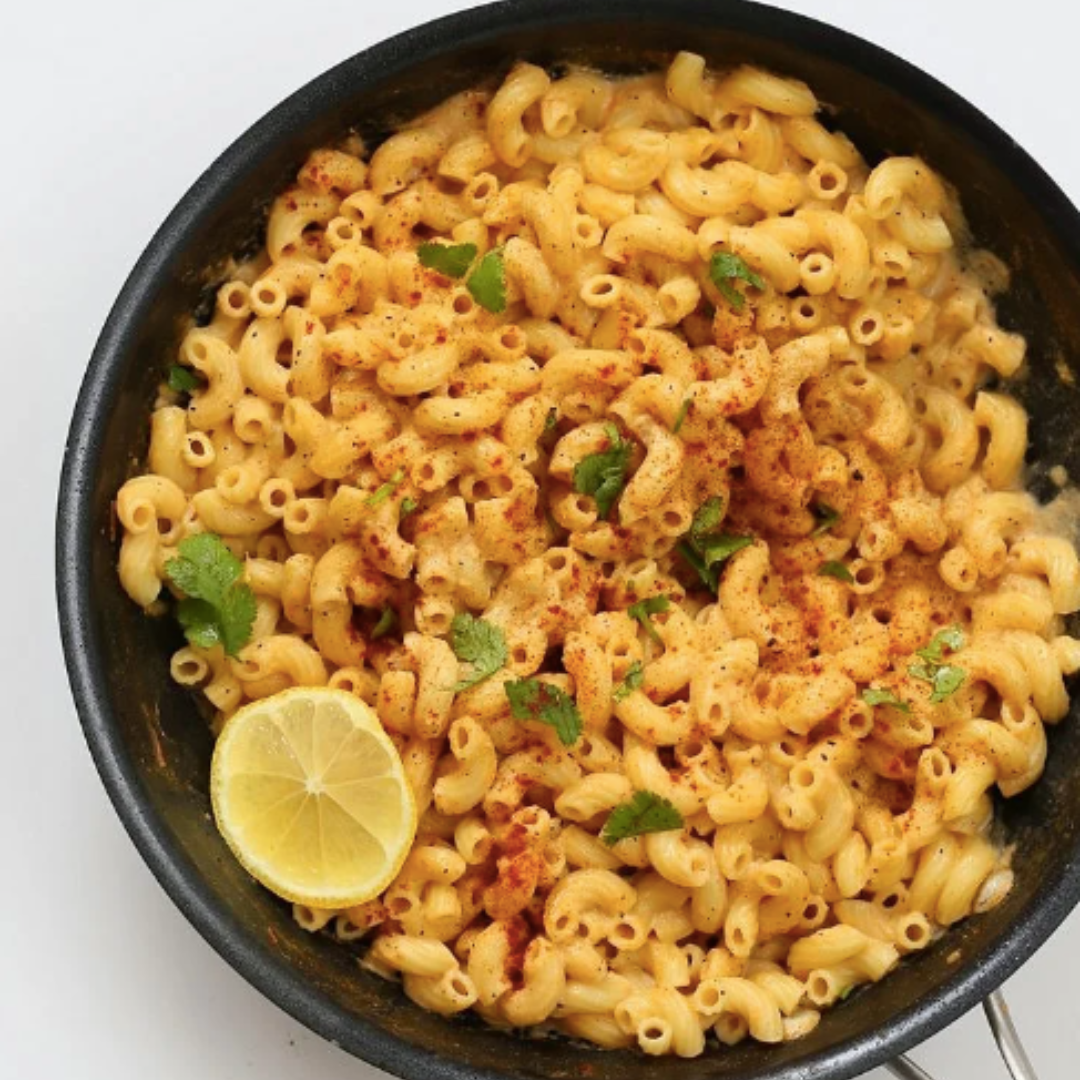 11Masala Mac and Cheese with Indian Spices by Vegan Richa

You may not have all of these spices on hand, but they’re worth the investment. Vegan Richa’s Indian recipes are phenomenal, and after succeeding with this fusion food, you’ll want to try them all.
Get the recipe here 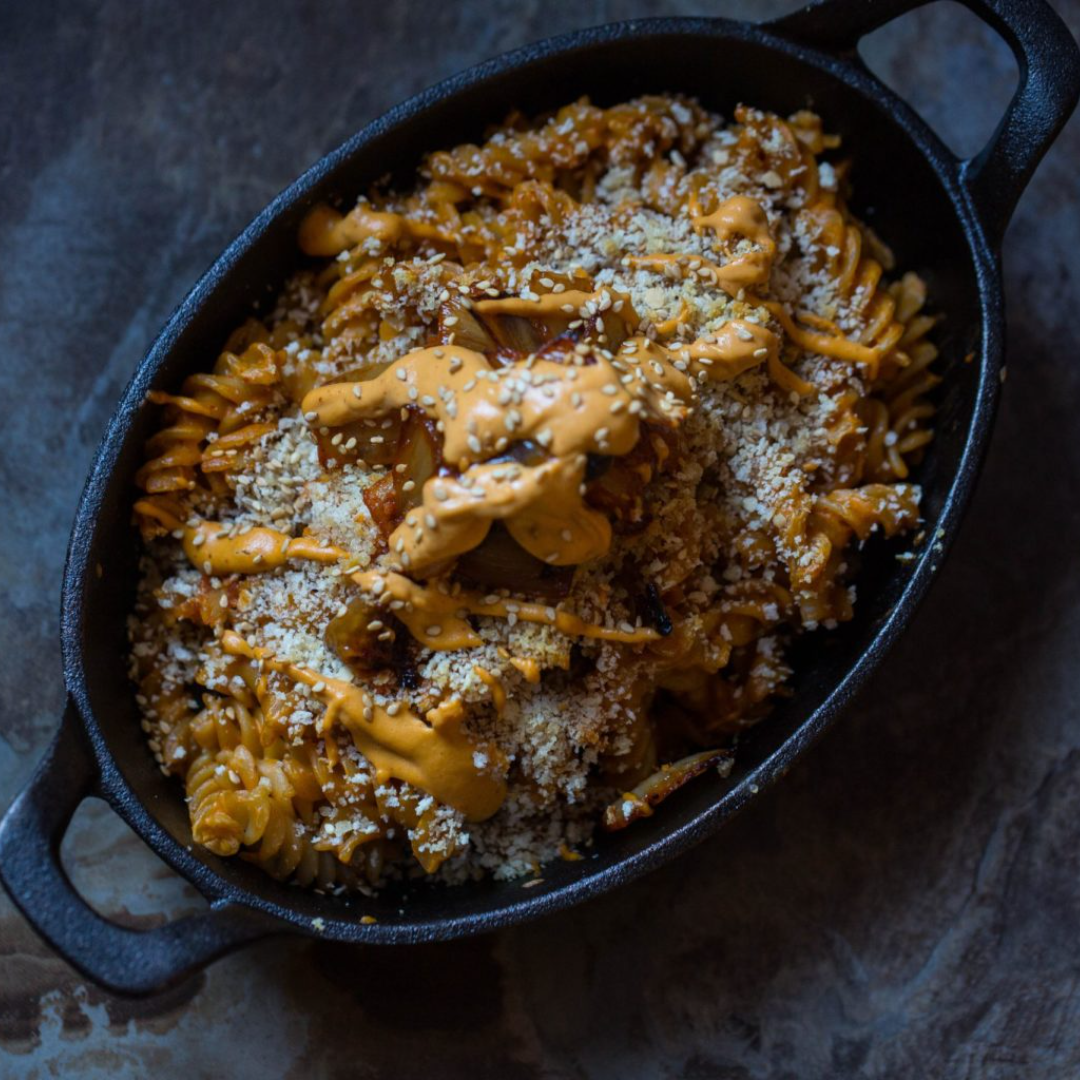 12Kimchi Mac and Cheese by The Korean Vegan

Basic mac and cheese may not do it for the self-proclaimed “heat seekers,” but that’s where this recipe comes in. Not only is the cashew-and-potato-based sauce infused with kimchi juice, it’s also flavored with jalapeño, gochujang, Korean chili powder, and chipotle pepper. The spicy casserole is topped with sesame oil-coated breadcrumbs and caramelized kimchi in gochujang. Spicy enough for you?
Get the recipe here 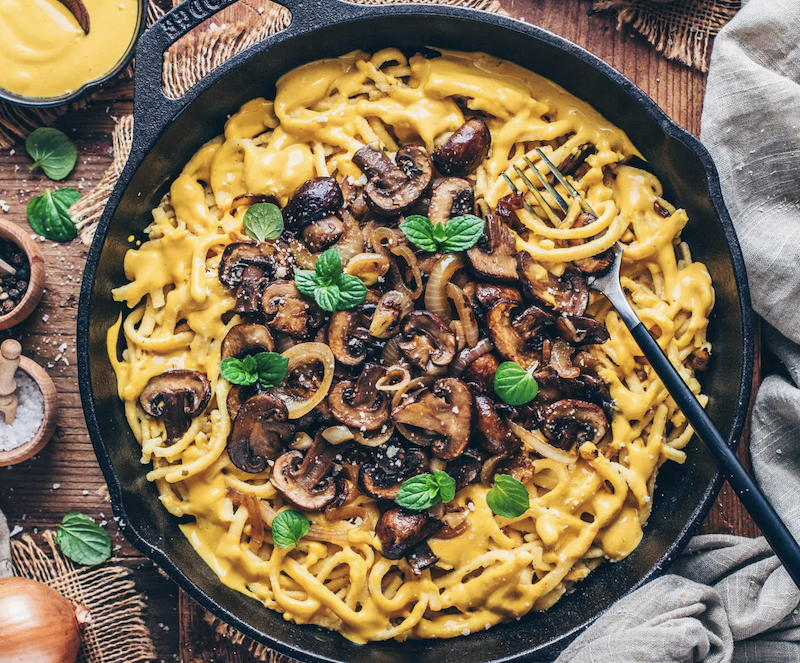 We love a good elbow macaroni, but spaetzle amps up the basic mac and cheese to an entirely new world of wonderful. Spaetzle are dumpling-like in consistency, meaning they’re soft and tender but retain a delicious chew. When doused with vegan cheese sauce and topped with caramelized onions and mushrooms, we swear a vegan angel gets its wings.
Get the recipe here 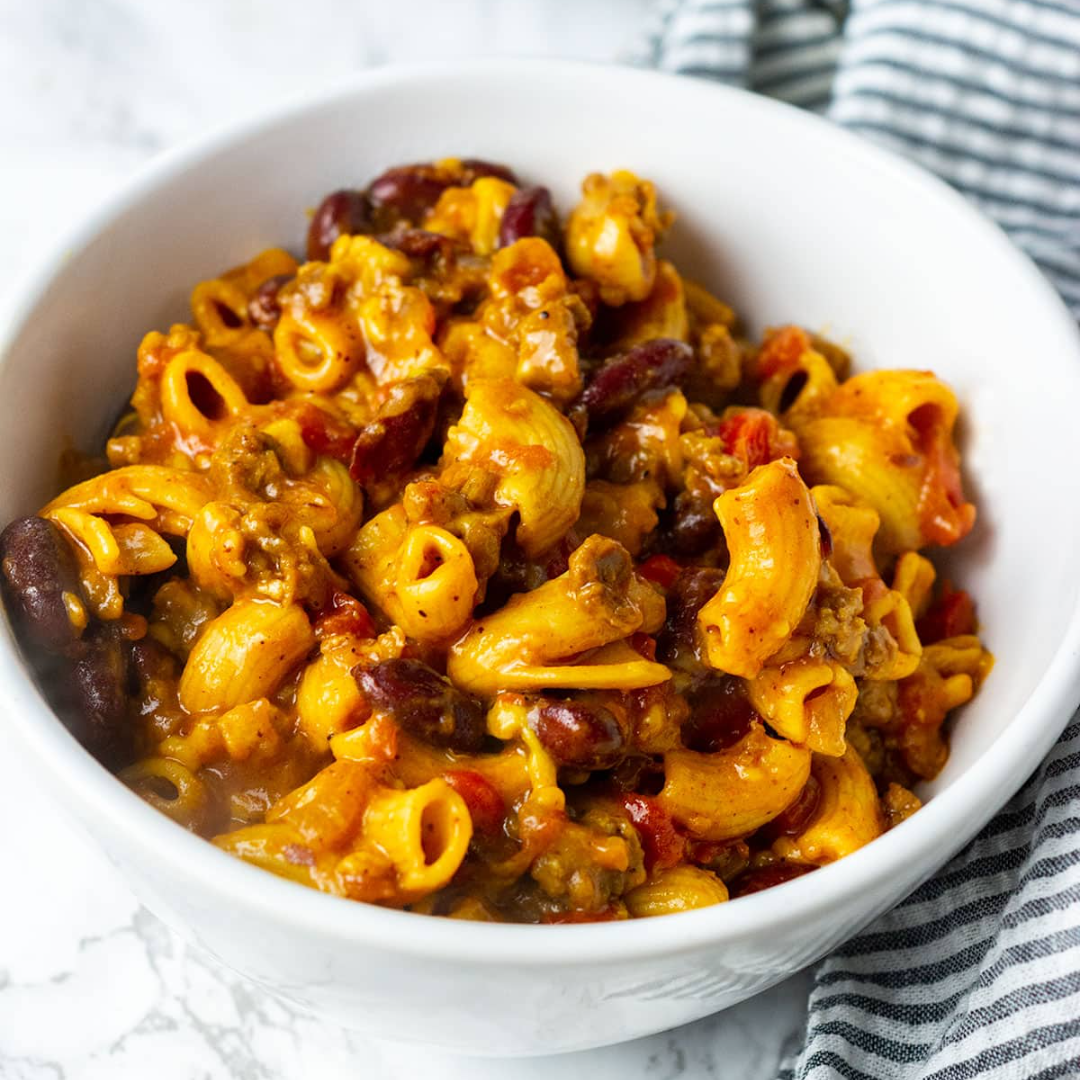 What’s easier than a one-pot recipe? An Instant Pot recipe. For those who grew up with chili mac, there’s no need to mourn its loss after turning vegan. This recipe nails it.
Get the recipe here 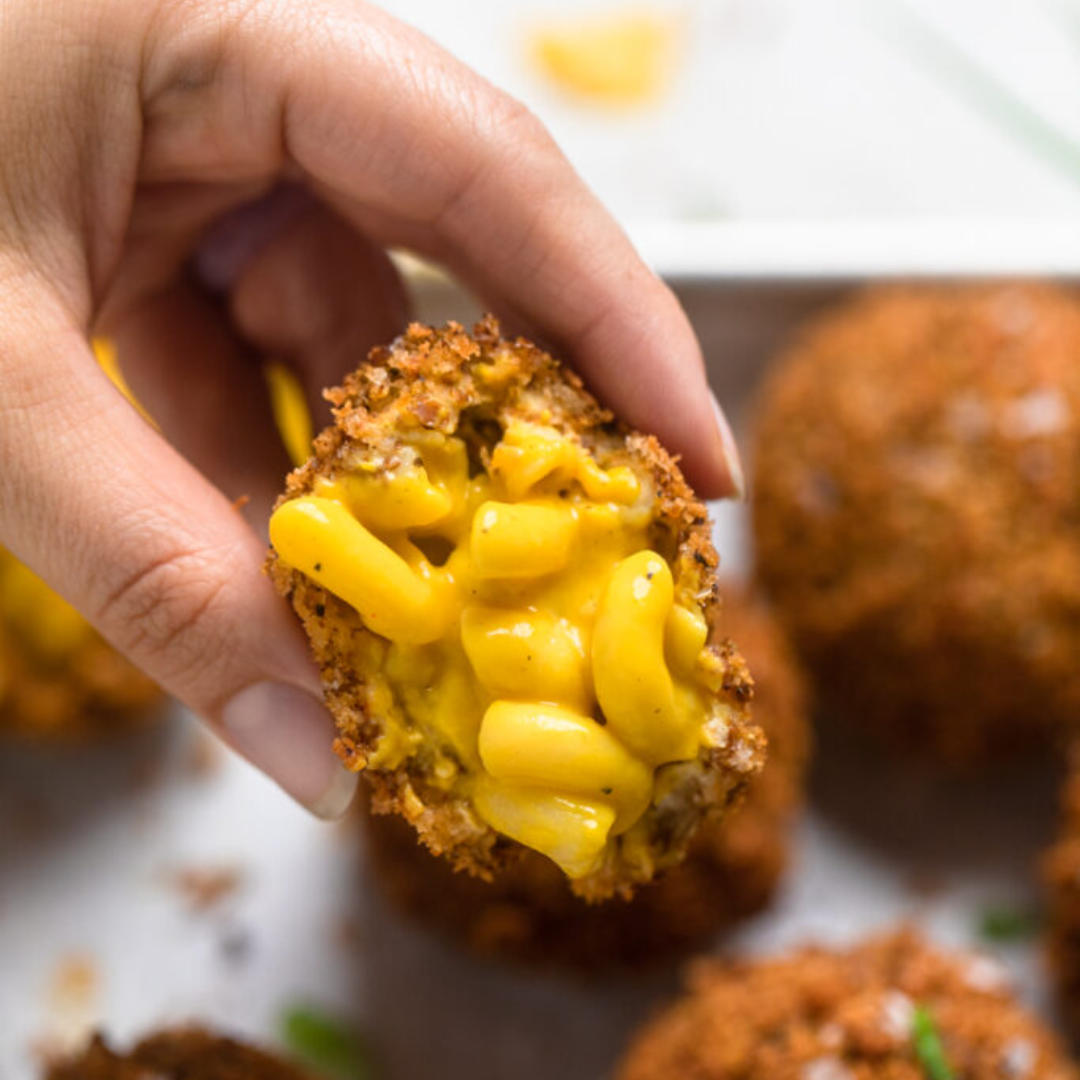 15Vegan Fried Mac and Cheese Balls by Make It Dairy-Free

What do you do on the rare occasion there is leftover mac and cheese? You deep fry it and serve it with collard greens. These slightly spicy golden nuggets are super crispy on the outside yet so incredibly creamy on the inside. This is how to level-up leftovers.
Get the recipe here 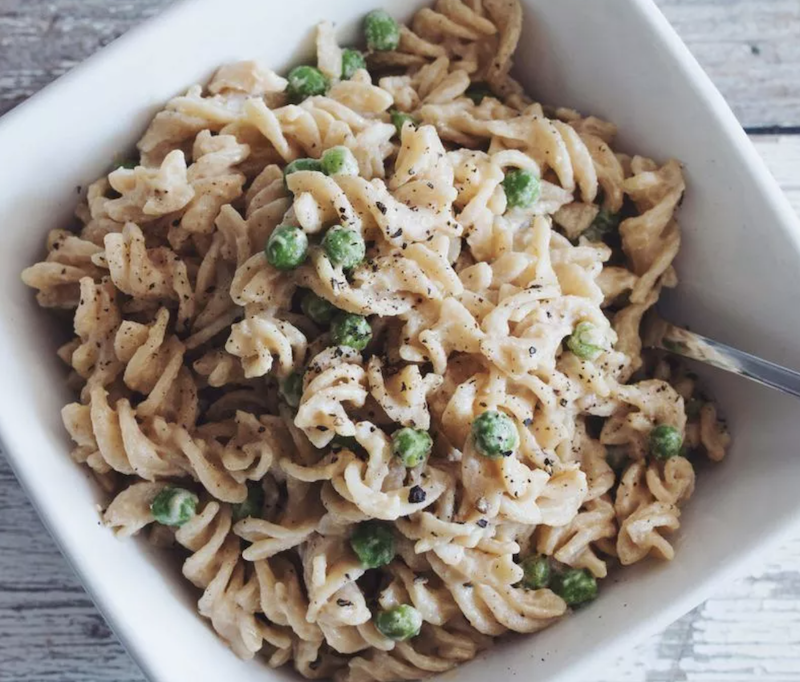 Kids love a play-on-word which explains why they’re willing to eat their vegetables when parents call it “mac and peas” or “mac and trees.” Granted, it could be the pasta and vegan cheese sauce. Either way, this cheesy dish is a great way to get a serving of veggies into any vegetable-hater’s diet.
Get the recipe here 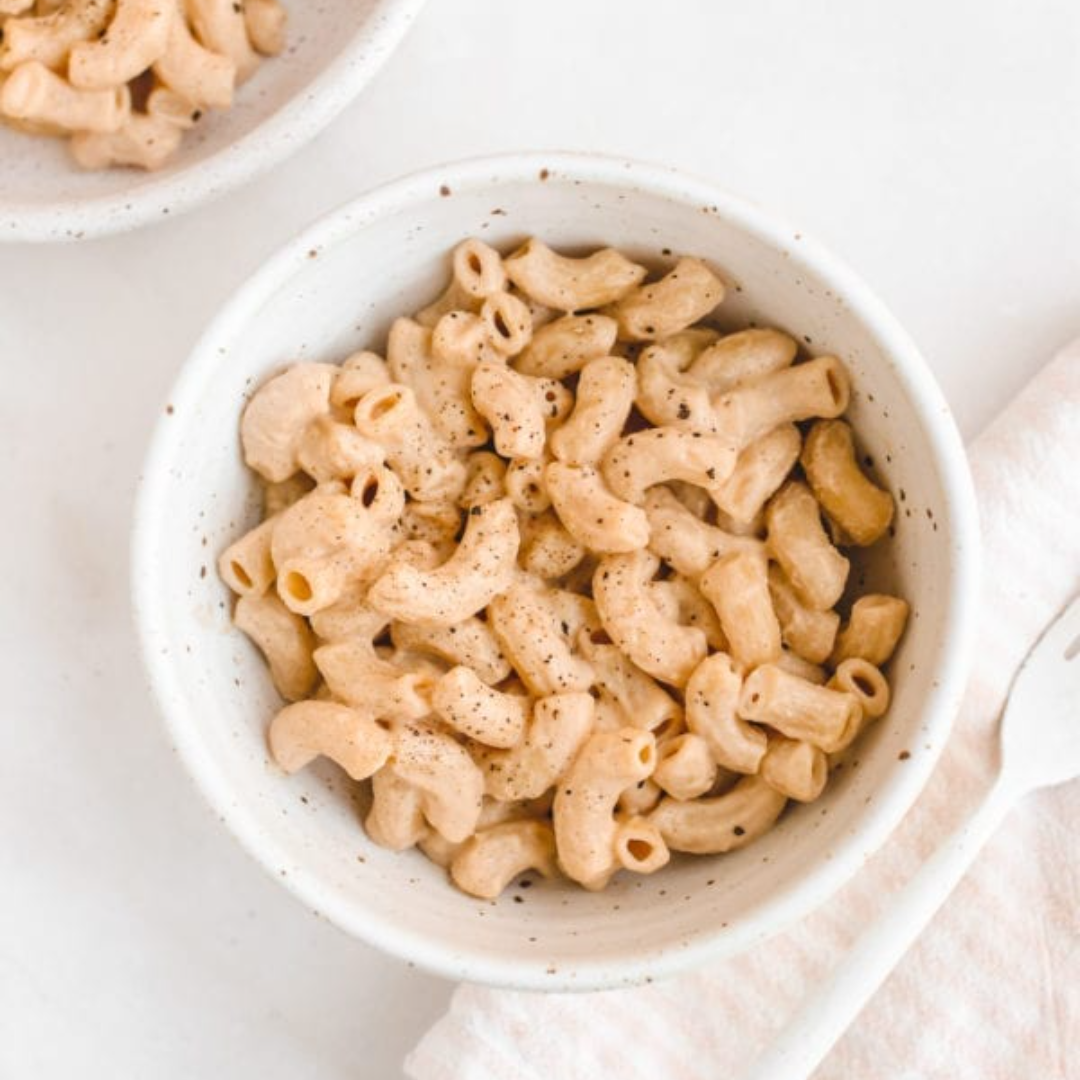 Free of nuts, oil, gluten, dairy, and sugar, this is the healthiest mac and cheese can ever hope to be. The protein comes from silken tofu and chickpea-based pasta, and the sauce gets its cheesy flavor from a combination of nutritional yeast, garlic powder, white miso, and other umami spices. Despite what’s not in it, this healthy mac is spot-on when it comes to taste and texture.
Get the recipe here

Homemade mac and cheese is great, but let’s not forget this is also the ultimate convenience food. You don’t need many ingredients or 45 minutes to enjoy this humble comfort, you just need a box and enough culinary skills to boil water. To gussy up your favorite vegan boxed mac and cheese (check out our official guide), throw a few broccoli florets into the water while the pasta is cooking. For frozen veggies, add these along with the cheese sauce to prevent overcooking. Top with store-bought vegan bacon such as PigOut. If you’re feeling fancy, finish with a drizzle of truffle oil.

For a meatier mac, look to this quick recipe. Afterall, when you’re at a barbecue, why have your mac on the side when it can be the star?
Get the recipe here 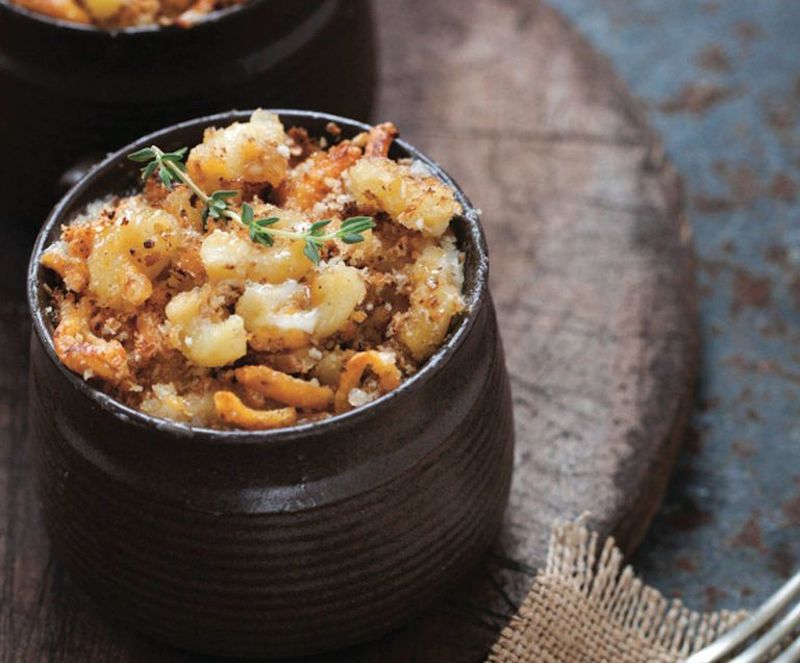 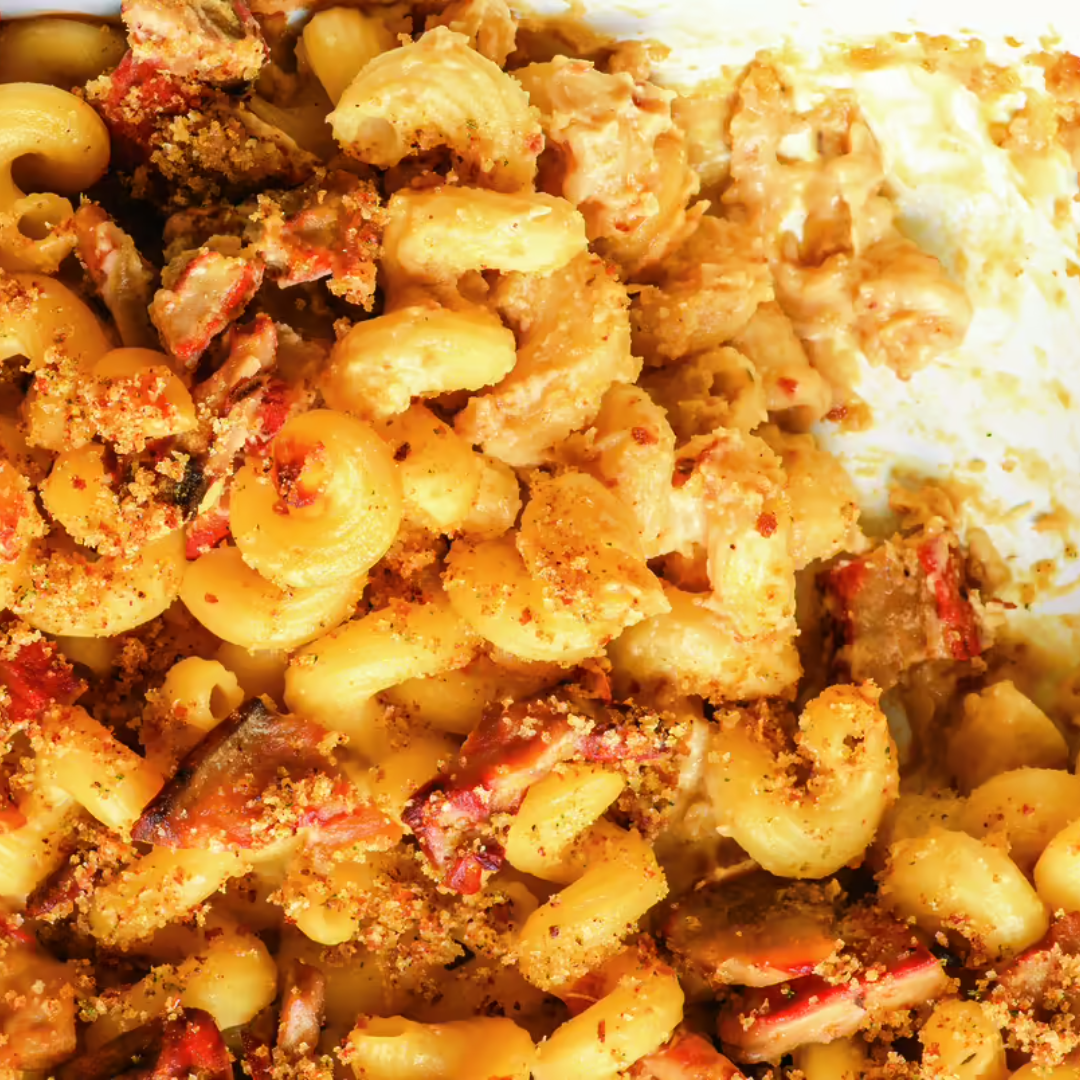 The antiquated rule of separating cheese and seafood does not apply when it’s vegan! The cheesy, roasted garlic sauce pairs perfectly with chewy lobster mushrooms for a refined dish you can’t get from a box.
Get the recipe here 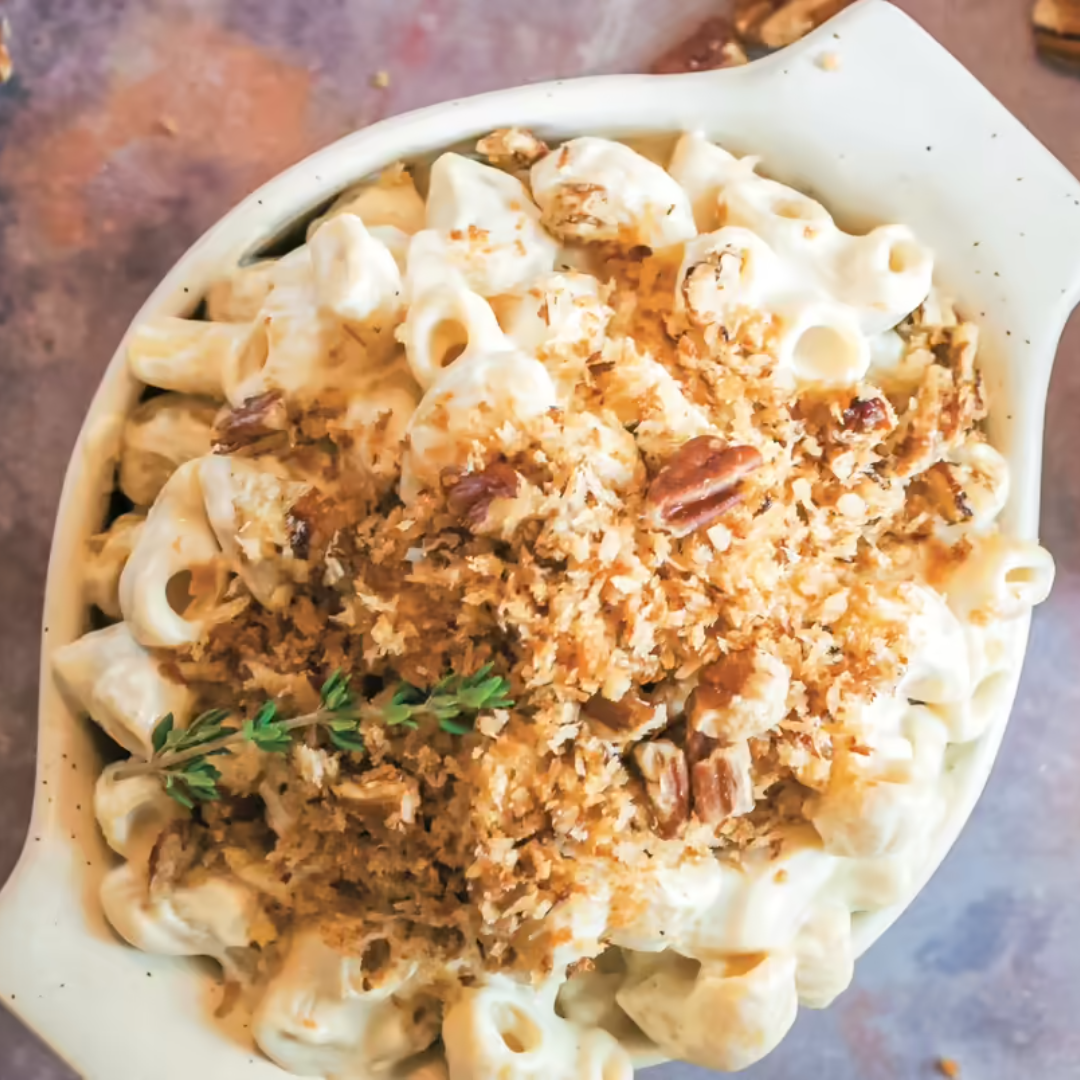 There’s one in every crowd—some people just prefer vegan white cheddar. This breadcrumb and toasted pecan-topped white mac and cheese is just for you.
Get the recipe here 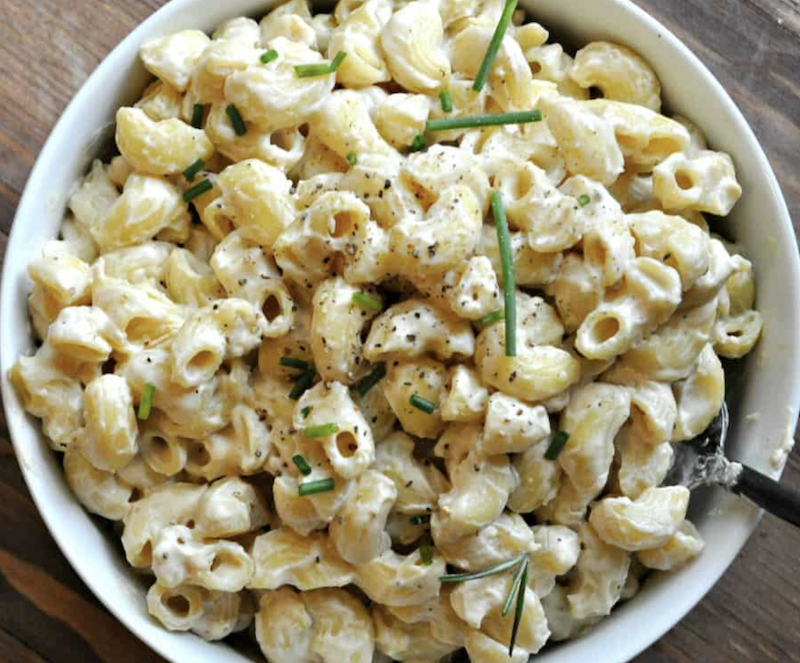 23Truffled White Vegan Macaroni and Cheese by Rabbit and Wolves

Want to really impress someone? Invest in a bottle of quality truffle oil. This recipe is fairly straightforward and the ingredient list is intentionally short to allow this coveted ingredient to shine. Just be aware: once you acquire a taste for truffles, it’s hard to go back to the original.
Get the recipe here

For even more pasta recipes, read: