Is the Best Diet for Senior Health Plant-Based? Here’s What the Experts Say.

In stark contrast to much of the western world, people who live on the Greek island of Ikaria have a good chance of making it into their 90s in good health. Experts speculate there are a few reasons for this. One is regular exercise. Ikaria is mountainous, so just visiting a shop is physically demanding. Another is a strong sense of community, which keeps rates of depression low. And another is diet.

Ikaria is one of the world’s five official Blue Zones. Like Okinawa in Japan and Nicoya in Costa Rica, its population follows a diet that is 95 to 100 percent plant-based. And we’re not talking vegan meats and processed foods, but rather fresh fruits, leafy greens, grains, beans, and legumes. So is a plant-based, whole foods diet the best for senior health? If Blue Zones are anything to go by, it certainly appears that way. Here, we take a closer look at why.

Research confirms that as human beings age, food becomes more important than ever. And that’s because bodies start to change as they get older; muscles, bones, and organs need more support from vital nutrients.

Thinning skin, for example, is a common symptom of aging. But this makes it harder to absorb vitamin D from the sun. Vitamin D is important for calcium absorption, so this, in turn, can lead to a calcium deficiency. Both of these nutrients can be topped up through diet.

Protein is also key, as it helps to preserve muscle mass. Without it, elderly people are at a greater risk of muscle deterioration, which can lead to mobility issues and slower recovery from illness. One study, published in The Journals of Gerontology, found that out of 2,900 senior people, those who ate the most protein were 30 percent less likely to become functionally impaired.

Potassium, omega-3, magnesium, and iron are also common deficiencies in older people. According to the British Geriatrics Society, 30 percent of people aged over 85 in the UK have anemia.

Diet can help to play a role in maintaining optimal senior health, which, may, in turn, reduce the risk of certain diseases.

The World Health Organization notes that the risk of dementia, for example, is lowered when people follow a nutritious diet and limit their alcohol intake, among other healthy behaviors. And the Alzheimer’s Society acknowledges evidence that a diet rich in fruits, vegetables, and cereals, and low in red meat and sugar, may help to reduce the risk of developing the disease.

Research also suggests that a diet high in plant foods can reduce the risk of heart disease, type 2 diabetes, and some types of cancer, all of which are common causes of death among elderly people.

“While some people may be tempted to believe that veganism is a diet for young people, the fact is that there are many benefits to eating vegan foods for seniors,” registered dietitian Amber Dixon, MPH—who is also a geriatric nurse and founder of Elderly Guides, a platform that provides health resources for seniors and their families—says.

She reiterated that it may reduce the risk of dementia, as well as help people to maintain their weight. “Eating vegan means you will be getting plenty of fiber and complex carbohydrates,” she notes. “Which helps you feel fuller longer and also helps regulate blood sugar levels.”

There are various types of vegan diets. For example, a diet that consists solely of French fries and donuts isn’t packed with nutrition, but it’s still vegan. For optimal senior health (and other ages, too), one specific type of vegan diet is recommended: whole foods, plant-based. Just like the Ikarians.

Like all people who follow a vegan diet, however, seniors may need to consider B12 supplementation. Research suggests that the likelihood of vitamin B12 deficiency increases with age, and affects 6 percent of people aged over 60. Vitamin B12 can be found in nutritional yeast and fortified cereals, but it is not found in fruits and vegetables.

That said, a diet full of grains, leafy greens, beans, legumes, and other whole foods will help seniors to get nearly all of the vital vitamins and minerals that are needed to help maintain good bone, muscle, and organ health. Here are some of the best foods to put on your plate, recommended by dietitians.

The best foods for seniors, recommended by dietitians 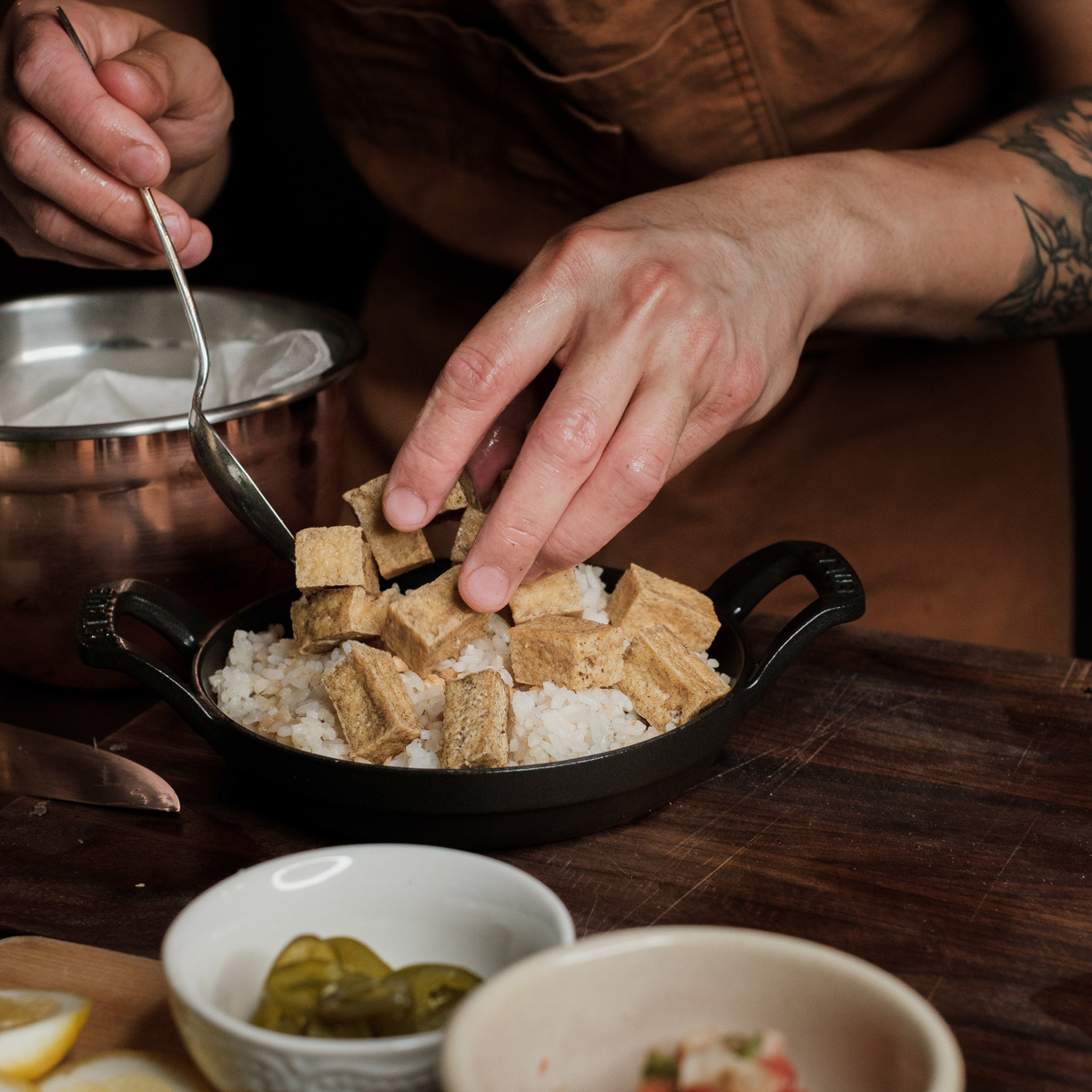 “Tofu is one of the highest sources of protein amongst vegan foods,” registered dietitian Patricia Kolesa, MS RDN, says. This, she says, is because of seniors’ higher protein needs. She notes that tofu, which contains roughly 8 grams of protein per 100 grams, “can be a helpful source in preventing the process of muscle breakdown.”

“Protein foods can also help with feeling full and satiated after a meal,” Kolesa adds. “Additionally tofu is high in calcium, which can be helpful in maintaining strong bones in older populations that are at higher risk for fractures and arthritis.”

For more guidance on how to cook with tofu, peruse our guide to the best preparation and cooking methdods. Other high-protein vegan foods include tempeh, which has 19 grams of protein per 100 grams, and seitan, which has a whopping 75 grams of protein. 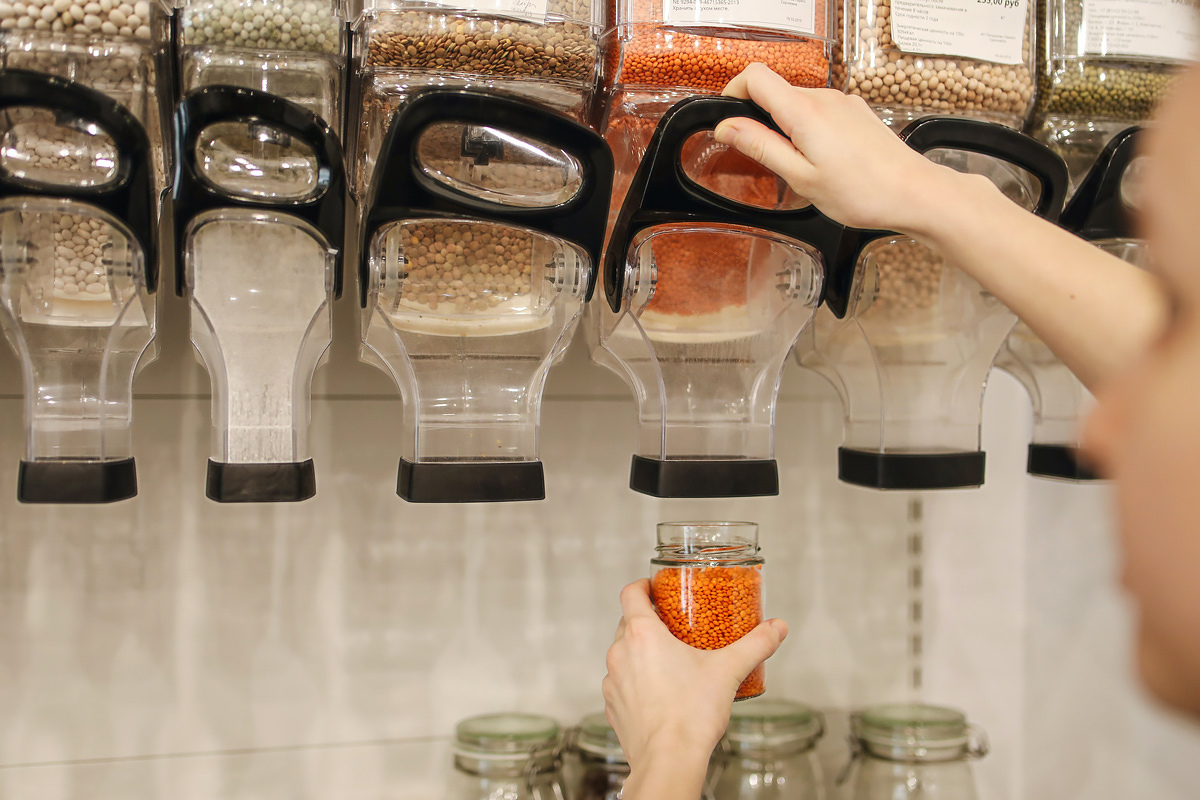 Kolesa also notes that beans are a good source of protein for older people. “Combined with rice, they can make for a complete protein,” she explains. Kidney beans are a particularly good source, with 24 grams per 100 grams. To find out which beans have the most protein, we’ve created this handy guide to everything from cannellini to edamame (plus high-protein recipes).

But, protein aside, beans have other benefits, too. “Beans also contain fiber,” Kolesa says. “In older populations, it can be more difficult to form a bowel movement and fiber can aid in the digestive process by helping to form poop and remove waste from the body. Another problem amongst seniors is anemia, which results from low iron. Beans are a huge source of iron and should be paired with a vitamin C food like red bell peppers for the body to best absorb it.”

Dixon agrees that beans are a good source of nutrition for seniors, and also recommends other protein- and vitamin-rich legumes, like lentils and peas. “Beans and legumes are high in protein, fiber, and other nutrients that are important for seniors,” she says. “They can be used in a variety of recipes and are easy to incorporate into everyday meals.” 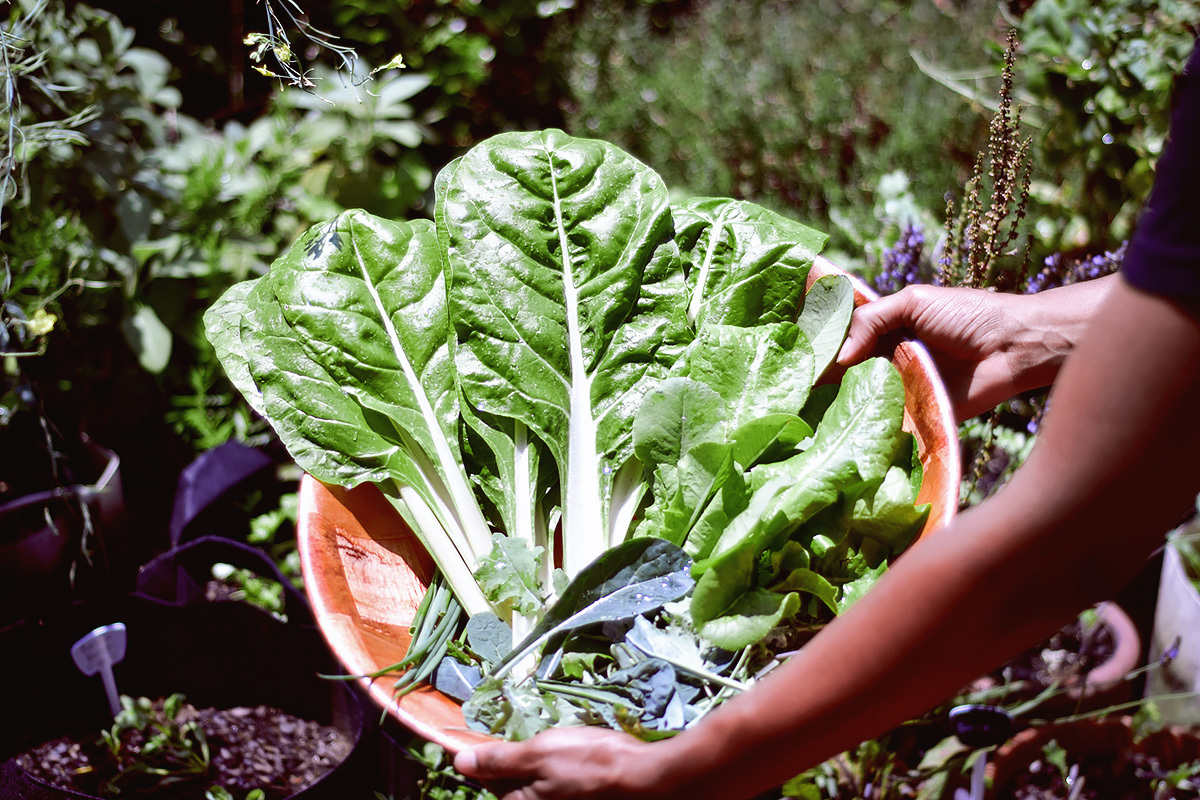 Dixon also recommends that seniors pack their diets with greens, like spinach and kale. “They’re high in vitamins A and C, which are important for eye health and preventing age-related vision loss,” she says. “They also contain antioxidants that help fight free radicals, promote healthy skin, and reduce inflammation.”

To pack in the leafy greens (with a side of all-important beans and legumes!), try this Zesty Vegan Salad with Blackened Chickpeas, this Vegan Spinach, Chickpea, and Lemon Pilaf, or this Vegan-Apple Chickpea Kale Salad With Mustard-Dill Dressing. 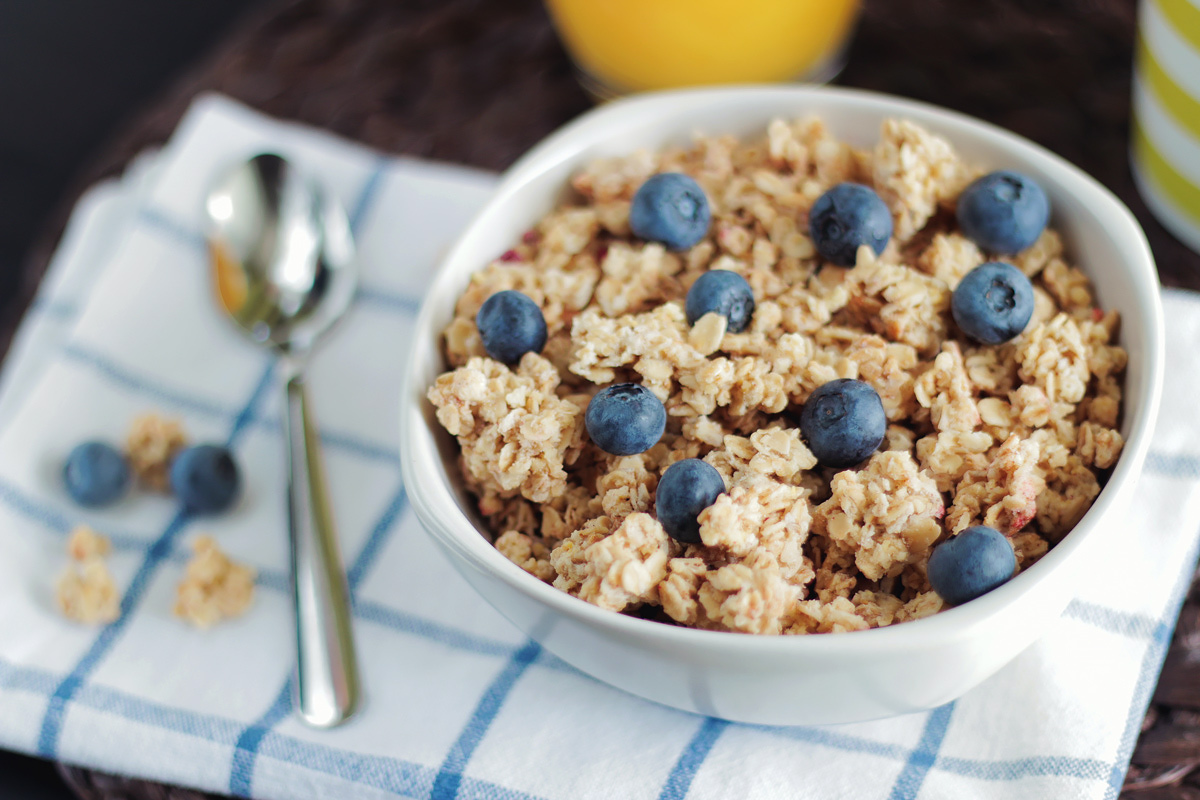 Whole grains are another essential part of a balanced plant-based diet. They include foods like brown rice, wild rice, oats, barley, durum wheat, and rye.

For examples of how to enjoy whole grains in your diet, check out this Vegan Garden Fried Rice, this Jamaican-Inspired Vegan Banana Oatmeal Porridge, or these Healthy Vegan Strawberry Chia Oat Bites. 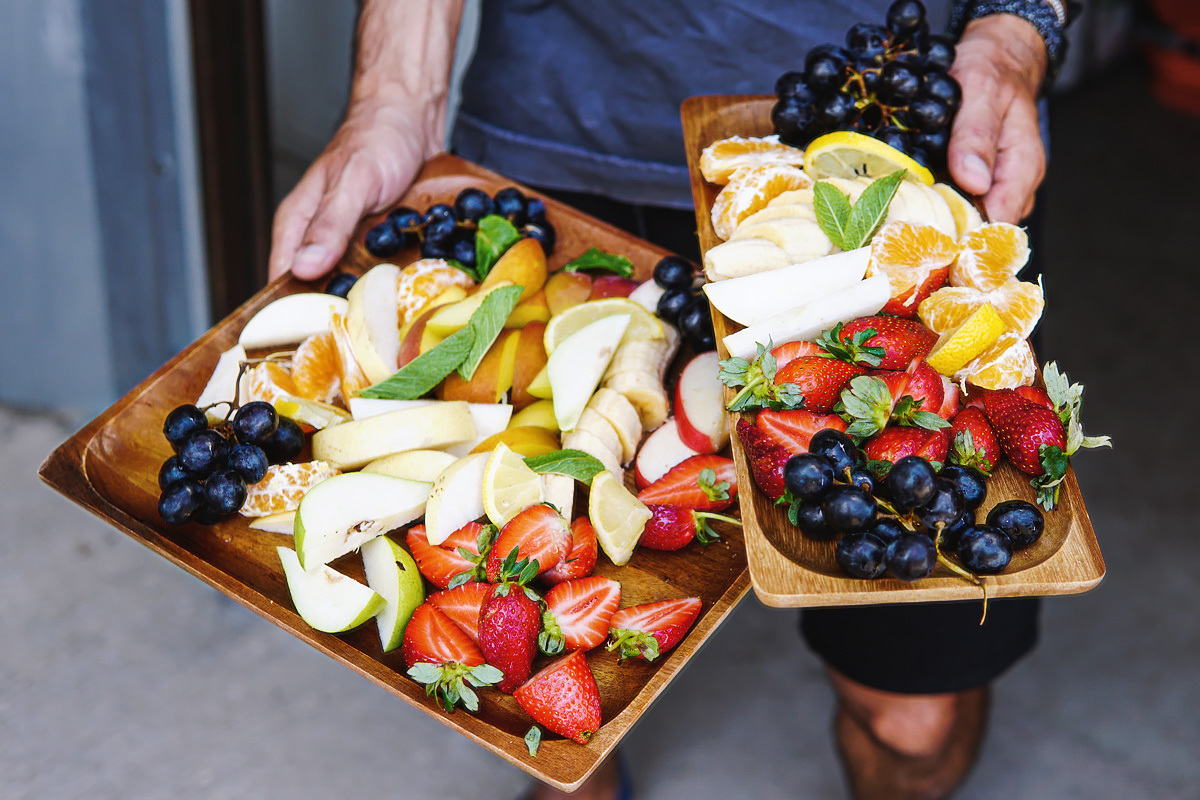 5 A rainbow of fruits and vegetables

Other foods that can make up a healthy, whole foods, plant-based diet include berries, like bananas and strawberries, which are rich in vitamins like B6 and vitamin C, as well as colorful vegetables like peppers, sweet potatoes, butternut squash, beetroot, pumpkins, carrots, and more.

All of these examples have unique properties. Orange and yellow fruits and vegetables, for example, contain beta-carotene which is converted to vitamin A in the body. To maintain good health at any age, but particularly in the senior years, people should aim to, quite simply, make like Blue Zone-rs and eat the rainbow.

For more on health and nutrition, read:

Charlotte is a writer and editor based in sunny Southsea on England’s southern coast.