Lizzo: This Custom Vegan Cheese Board Made for You Is a Masterpiece

Austin, TX-based vegan cheese brand Rebel Cheese recently created a custom vegan charcuterie and cheese board for Grammy Award-winning artist Lizzo. The brand was tasked with creating this custom board by Austin concert venue the Moody Center, where Lizzo performed on October 25.

The team at Rebel Cheese spent nearly seven hours creating the cheese board which, among many other items, consisted of two specially made vegan cheeses for Lizzo: Taki Chèvre and a Sour Cream and Onion Cheddar Cheese Ball coated in Takis (Lizzo’s favorite snack).

But this cheese board isn’t like any other cheese board. In fact, the Rebel Cheese team transformed the charcuterie fixings into a replica of Lizzo herself, using Ash Chèvre wheels and blackberries for her hair; kale, edible flowers, and Sun-Dried Tomato Fromage wedges for her outfit; Colby Jack and Smoked Cheddar wedges to make up her buttocks; Spanish Paprika Chèvre rounds paired with corn nuts and capers for her left leg; and savory Chèvre coated in Taki crumbs for her right leg. And finally, her boots are made with creamy Dill Havarti.

The Lizzo replica is surrounded by other Rebel vegan cheeses, crudites, fruit, olives, and charcuterie-style foods—making for a full cheese board that is nearly four feet long and two feet wide. And, notably, the Rebel team spent those seven hours creating the cheese board in a walk-in fridge to keep the cheese cold and firm while working.

“The Moody Center reached out to us a week before Lizzo’s concert in Austin and asked if we could come up with something they could put in her dressing room for her because she apparently requested that no animal products come in the room whatsoever,” Marina Oglesby of Rebel Cheese tells VegNews. “We started at 5 am on the day we had to deliver and it was not ready to go until 11:30 am. It truly took a lot of time, precision, and effort to make it perfect.”

“Moody originally requested we spell her name out in cheese, but we thought we could do one better—and thus Lizzo in cheese form was born,” Oglesby says.

Rebel Cheese is still waiting to hear Lizzo’s thoughts on the cheese board, and they recently shared the creation on TikTok to help get the word out. “Lizzo herself is an absolute masterpiece, but yesterday she also became a vegan cheese masterpiece,” Rebel Cheese posted on TikTok with a video of the creation. “We love you grrl!”

Since going vegan in 2020, Lizzo has become known for her love of vegan food and often shares her vegan restaurant discoveries, homemade meals, and vegan snack experiments—including vegan-cheese topped Takis—with her millions of fans on social media. And now that Lizzo is traveling across the country and in Europe for her The Special Tour to promote her new album, we’ll likely be seeing more vegan takeout meal discoveries along the way.

In fact, a few days ago, the musical artist was in Portland, OR and shared her takeout meal from local vegan Jewish deli Ben & Esther’s. In a TikTok video, Lizzo unwraps her Egg + Bacon + Cheese bagel sandwich from Ben & Esther’s.

“I got the jalapeno bagel with the bacon scallion schmear,” Lizzo says after taking a bite. “It’s savory, creamy, salty—got that bacon-y [flavor] … it’s good. Ten out of 10.” 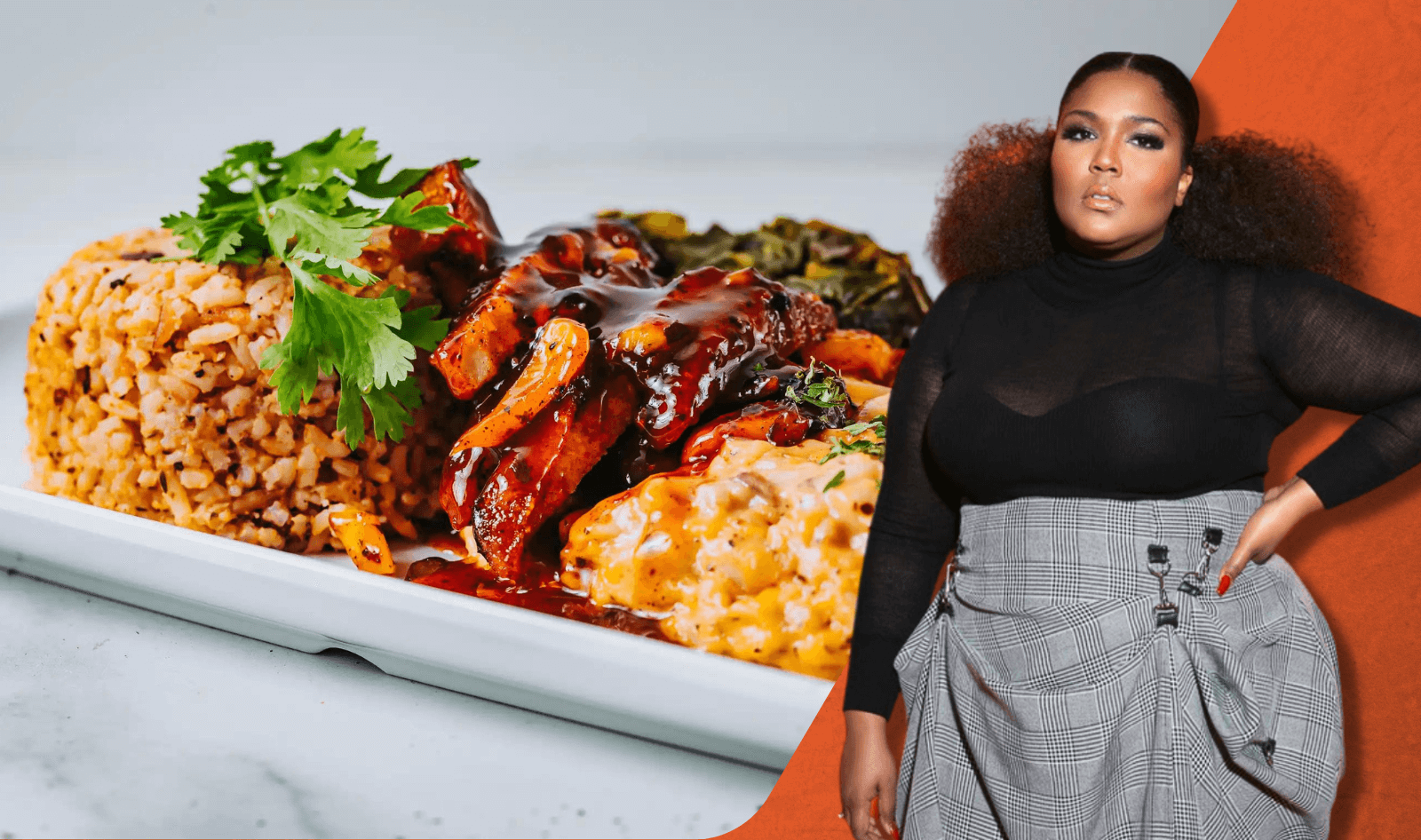 And last month, when Lizzo was in Atlanta, GA, she took to TikTok to share her meal from Atlanta-based vegan restaurant Planted Soul. The meal consisted of Loaded Fries (French fries topped with vegan cheese, chili, and parsley); Esquites (Mexican street corn with vegan mayo, spices, vegan butter and cheese, topped with Planted Food’s signature sauce); and the Jamaican Me Crazy, which includes Jerk Chick’n, Rice and Peas, Collards, and Mac and Cheese.

“Let me tell y’all something, Atlanta: Y’all’s vegan food … what?!” Lizzo says as she opens a container filled with Planted Soul’s Loaded Fries. “Y’all not playing with nobody.”

With Lizzo sharing her mouthwatering vegan meals on social media, she has been helping change the stereotype that vegan food is just salads and tofu—and showing that classic foods we all know and love can be recreated without animal products.

At the same time, the musical artist has been working to change the narrative around vegan food as it intersects with fat phobia. As a confident plus-size celeb herself, she is inspiring others to show the world that fat bodies are beautiful.

Last year, Lizzo took to TikTok to shut down fat shamers by sharing a video of herself in her underwear eating a vegan egg sandwich over an audio clip of a woman saying, “I’m seeing way too many plus-sized vegans. Are ya’ll frying the lettuce?” 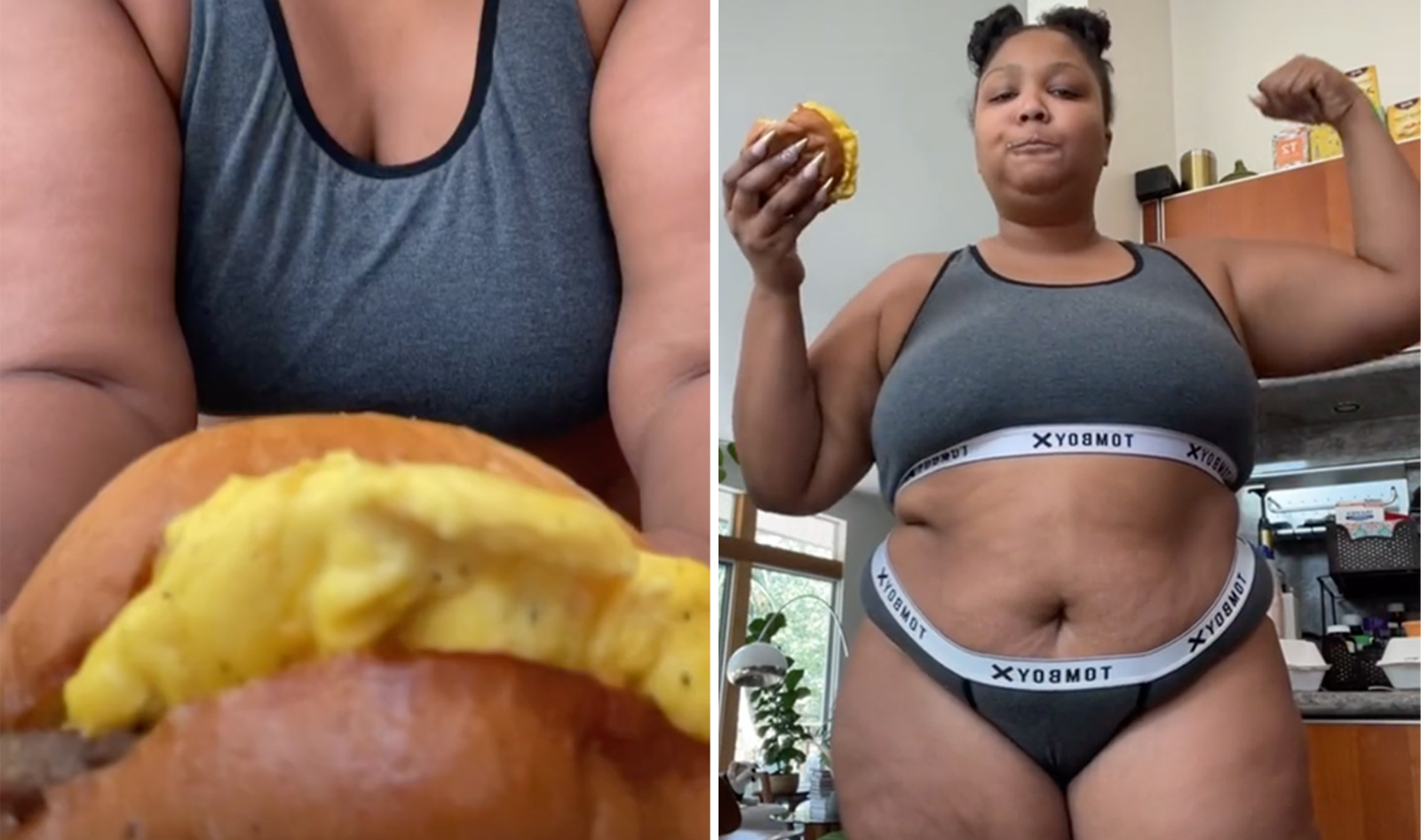 Lizzo clapped back further in the caption of the TikTok video. “Yes, actually I do,” Lizzo said in reference to fried lettuce. “Shout out to all my fat vegans—we look as good as we feel … and to the haters, good luck chasing that narrow beauty standard,” Lizzo said.

Ultimately, this activism around body positivity is also tied to her plant-based lifestyle. In a Vanity Fair interview published last month, Lizzo talked about how she prioritizes health and that eating plant-based isn’t about losing weight. “​​I lead a very healthy lifestyle—mentally, spiritually, I try to keep everything I put in my body super clean. Health is something I prioritize, wherever that leads me physically,” Lizzo said before referencing the frying lettuce incident. “I’m not a vegan to lose weight. I just feel better when I eat plants.”