Animal rights organisation PETA has launched the Vegan Wool Challenge, calling on designers and researchers to develop a vegan alternative to sheep’s wool with a lower environmental impact.

The competition will award $1 million to the first entrant who develops a bio-based or bioengineered material that mimics the look, feel and performance of wool and is adopted by a major fashion brand.

The hope is that this will help to cut emissions from the wool industry and support PETA’s ongoing campaign against animal cruelty.

“Even on ‘sustainable’ and ‘responsible’ farms, workers beat, stomped on, cut up and slit the throats of conscious, struggling sheep,” PETA claimed.

“The creation of a viable, sustainable vegan wool could help abate suffering and fight the climate catastrophe, as the wool industry produces massive amounts of methane, erodes soil and contaminates waterways.”

The winning material has to rival or surpass the beneficial qualities of wool, which is rapidly renewable and can be used to create garments that are biodegradable and recyclable while helping to neutralise odour and hold in warmth.

At the same time, the wool alternative needs to be completely free of animal products in a bid to eliminate the growing ethical and environmental concerns related to mass animal agriculture.

Six alternatives to animal leather made from plants and food waste

In terms of volume, wool is the most commonly used animal fibre in the fashion. But it is also among the industry’s most polluting materials, ranked in the top four just behind leather, silk and cotton – and coming off worse than plastic-based synthetic leather.

This is due to the natural resources needed to raise sheep and the methane emissions they generate throughout their life, which are more than 25 times as potent at trapping heat in the atmosphere as carbon dioxide.

“Among animals, sheep are second only to cows when it comes to the production of the greenhouse gas methane,” PETA said.

Winning material must be adopted by large clothing brand

A slew of companies are already racing to create biomaterial alternatives to leather and silk, made of everything from mushroom mycelium to natural rubber and rice husks, which have been highly publicised and adopted by brands from Adidas and Hermès to The North Face.

PETA ran another vegan wool competition in 2018 in collaboration with fashion house Stella McCartney, which crowned a material called Woocoa made from coconut fibres and hemp as its winner. However, wool alternatives don’t yet appear to have gained as much traction as other substitutes for animal products, such as alternative leathers. 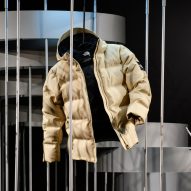 With its $1 million prize pot, PETA now hopes to accelerate innovation in this space by demanding that the winning material must be scalable and sold by at least one of the 10 largest clothing retailers in the world by January 2024.

“From apples and hemp to kombucha tea and cacti, there seems to be no limit to what designers can use to create wonderful, animal-free clothing and accessories,” said PETA’s executive vice president Tracy Reiman.

Although the competition stipulates that the winning material must be made from a bio-based or bioengineered fibre with “100 per cent traceable inputs”, it does not explicitly prohibit the use of plastics.

This is despite the fact that substitutes for other animal byproducts including leather have previously been criticised for making use of plastic binders or films, which are not renewable and could hinder their biodegradability and recyclability.

Industry organisations including British Wool have challenged PETA’s animal cruelty claims, arguing they are not representative of the industry at large while underlining the benefits of wool as being biodegradable, durable and generally washed less than other materials without shedding microplastics into the environment.

“There’s no denying that the fashion industry needs better sustainable solutions, but we must be mindful that new initiatives, such as those which directly, or indirectly, encourage use of synthetics, do not cause more harm than good,” British Wool’s marketing director Graham Clark told The Guardian.

Farmers are also exploring alternative methods of cutting the emissions associated with raising sheep, making use of regenerative farming practices and feeding the animals seaweed to reduce their methane output.

The image is courtesy of Shutterstock.

This vegan mango sago is SO GOOD #shorts

This vegan mango sago is SO GOOD #shorts

Vegan Wings in Kansas City? Here Are Some Top Spots