“I always knew I wanted to be a chef,” Tuala says. “I saw how food brought people together, even in the rough times of one’s life.”

That difficult time was her grandfather’s heart attack. Tuala, who had already started experimenting with peanut butter and jelly on tortillas and playing pretend cafe with her cousins, knew she wanted to do something to help her grandfather’s heart. The answer was either to become a chef or a doctor. She chose chef.

Chef Crystal Tuala is serving some of the best vegan fast food in Phoenix.

Other family members also played a part in forging her food journey. She’s thankful for her grandmother’s unwavering support and help in paying for culinary school, and to her mother for not letting her take an office job every time she felt burnt out.

“I even got my tattoos to follow a chef’s coat pattern in case the world rejected my ink,” Tuala says. She has a lotus on her shoulder to represent that beauty can grow in the darkest places.

Now age 36, Tuala is not only a chef, she’s the founder and owner of Solár: A Vegan Eatery, a ghost kitchen concept she opened in Tempe Food Court in August 2021. This is the place to go for vegan fast food, plant-based versions of beloved grub like loaded fries, tacos, burgers, mac and cheese bowls, and especially standout chicken sammies.

And the food does indeed come out fast. Order on delivery platforms like DoorDash, or for pickup online, or at the self-serve computer kiosk, and before you’ve even scrolled the latest on TikTok, your food is ready.

Solár’s Hot Chicken Sandwich is a stacked siren that takes you on a texture journey.

But this isn’t fast food in the traditional sense. Tuala contemplates every component, bringing both imagination and cooking techniques to the table.

Chicken patties are scratch-made from a bean-tofu-flour-spice mix that’s triple dredged and fried to crispy, crunchy perfection. Tangy slaw is spiked with lemon zest-infused oil and takes two weeks to make. Zippy Solár Sauce is mixed with vegan mayo, Frank’s RedHot, spices, and pickle juice, and tastes so good, you could literally dunk anything in it. Put it all together on an exceptional toasted brioche-style bun with tangy ridge-cut pickles, and it doesn’t just replace a fried bird sandwich, it upstages the classic.

Tuala’s mac and cheese comes swimming in a complex sauce of carrot, potato, tofu, and nutritional yeast that’s textured to feel like cheese. Carne asada is created with a combo of cannellini beans, flour, tomato paste, and spices, and finished with a smoky sauce to give it that caramelized taste and grilled look. Then there’s Tuala’s celery stock, a secret ingredient she simmers with vegetables and herbs for three to four hours and uses in everything from her BBQ sauce to firing up jackfruit on the grill.

“I don’t use water for anything,” she says. “It dilutes it.” 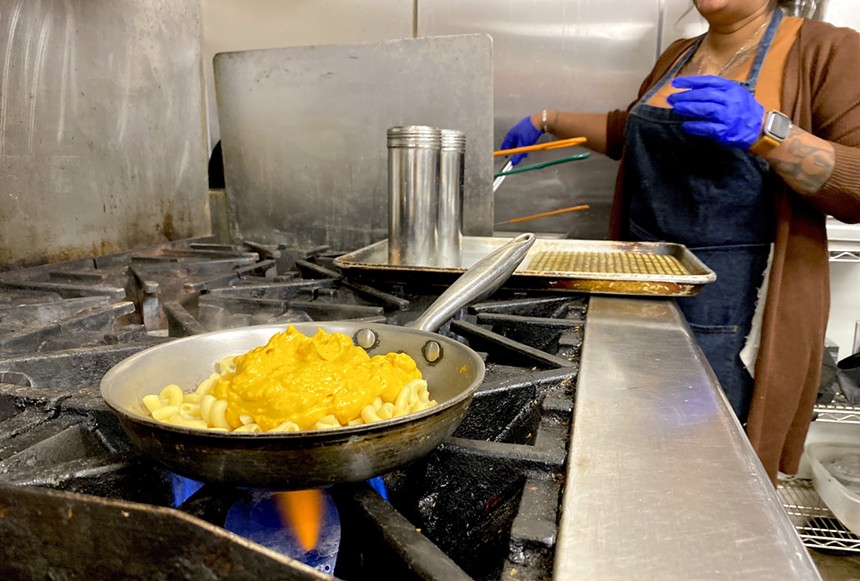 Mac and cheese in a creamy, dreamy, cheesy sauce.

Tuala started her career at Arizona State University in 2014 as a cook and was promoted many times until she was eventually named Executive Chef. There, she was responsible for feeding 500 student athletes a night.

“There were times the athletes would turn pescatarian, vegetarian, and vegan, so I would try to create menus that had variety to help them stay on track,” Tuala says. “We also had weekly meetings with the athletic director who was also a dietitian to help guide us in the right direction.”

The challenge of creating flavorful food that also met students’ dietary needs set Tuala up for success with Solár.

“Let me tell you, after ASU, everything is a piece of crumb cake,” she says.

That’s not to say Solár didn’t come with its challenges. With the help of two investors who she later bought out, Tuala opened Solár at a time when dine-in services were on hold, yet before most knew what a ghost kitchen concept was.

“I definitely saw an opportunity in the ghost kitchen during the pandemic due to it being a safer alternative,” Tuala says. “I don’t think we would have made it if we started as a brick-and-mortar.”

The very thing that saved Solár also created its own hurdles. Even though Solár is essentially a one-woman show, a Latinx-owned local small business with a staff of two, some guests think of it as corporate, part of a delivery-app-reliant space. Tuala also struggles with industry-wide kitchen staffing shortages, and because there’s no hostess to greet you, rather a nameless person behind plexiglass who hands over your order, it’s tough to put a face to the restaurant’s name.

“I have no control over the front of house. I’d love more of a face-to-face connection with my guests,” Tuala says.

Although Tuala doesn’t interact with her customers, she still manages to include personal touches. The food is packed thoughtfully, every wrapper and container chosen to travel well, plus Tuala writes a customized handwritten thank you on each brown paper takeout bag.

One benefit of the virtual brand is the flexibility to adapt to customer preferences. When Tuala got feedback wanting a less spicy chicken sandwich, she came up with the Herbivore, an herb-crusted version with absolutely no heat. Another family wanted something simple for their kids, so she added the three-cheese grilled cheese.

“I’ve created more options that are gluten-free due to requests as well,” Tuala adds, like loaded nachos, loaded fries, and shredded jackfruit tacos. Starting the first week of December, Tuala will take RSVP phone requests for her secret holiday menu items, which may or may not be vegan tamales and pozole.

“That’s my chance to meet my customers over the phone,” she adds. 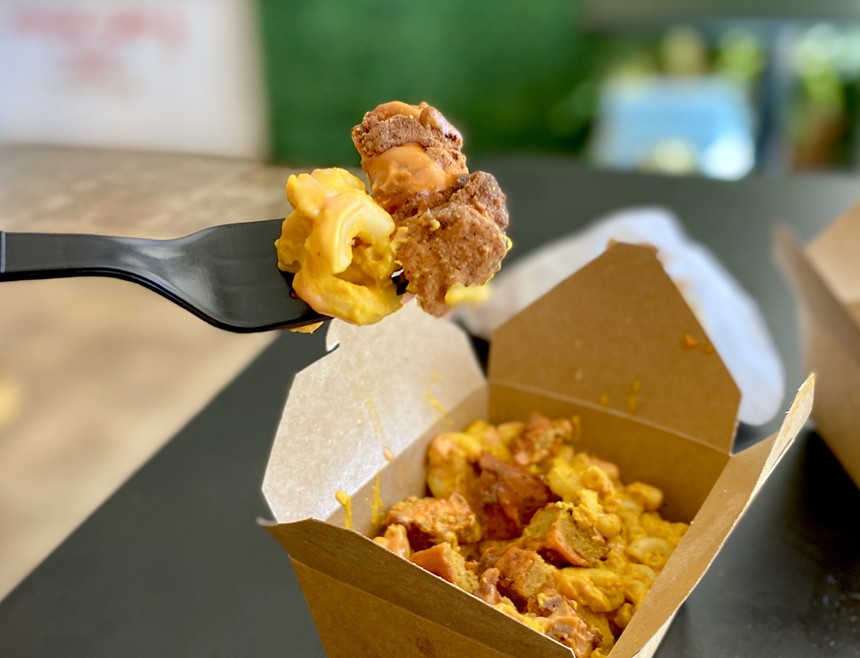 New specials pop up on the menu at Solár.

New menu items aren’t just about what the people want. Family has also played a part.

“During a time of great loss in my life, I wanted to shut it all down, but neither my grandmother or father-in-law would have approved, so I started creating dishes in memory of them,” Tuala says.

For the annual Phoenix Vegan Restaurant Week, she channeled her grandma’s green chili enchiladas with a jackfruit version and a mini chimi stuffed with banana vanilla pudding for dessert. Tuala is also introducing more Polynesian flavors to honor her late father-in-law. Lopati’s Chikn Wings, a saucy standout coated in brown sugar-sweetened BBQ sauce, have been selling out.

When Tuala first opened Solár, she didn’t know what a ghost kitchen was. She’s since added a second concept, El Sauz Veganos, a vegan street taco shop with flavors influenced by her Mexican heritage. And she’s not stopping there. Tuala sees a brick-and-mortar restaurant, a food truck, and a catering van in Solár’s future.

“Honestly, the best is yet to come,” Tuala says.