A vegan activist has come under fire after debating whether people should still eat turkey for Christmas after PETA revealed that millions of birds are slaughtered ahead of the big day each year.

She appeared on the show to discuss the animal rights’ group’s latest Christmas campaign, which was released this week, and follows the life of a friendly turkey called Toby in a heartwarming cartoon.

Susanna Reid and Ben Shephard, who were hosting today’s show, asked Jennifer whether the clip is meant to ‘guilt’ meat-eaters into giving up the bird for Christmas.

Sitting opposite Jennifer, Liz Webster, the chairman of Save British Farming, argued that eating turkey is more sustainable for the British farming industry, and that farming is less processed than some meat-replacement products.

Viewers watching at home said they would be eating turkey for Christmas and that vegans shouldn’t ‘preach’ to people about eating meat. 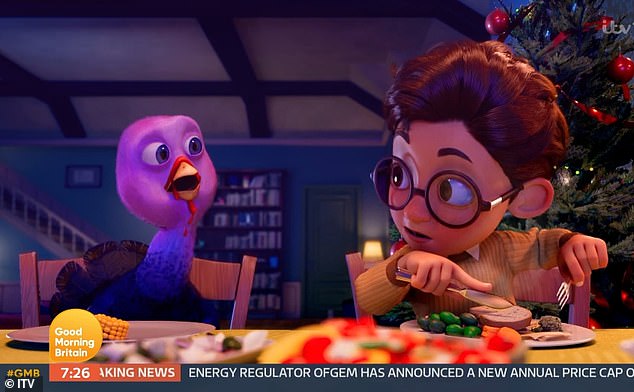 She appeared on the show to discuss the animal rights’ group’s latest Christmas campaign, which was released this week, and follows the life of a friendly turkey called Toby in a heartwarming cartoon

‘Toby represents 10 million turkeys who are slaughtered at Christmas time alone in the UK,’ Jennifer said.

‘There is a disconnect here. We are celebrating the season of peace and goodwill with the corpse of a tortured bird in the middle of the table,’ she added.

The activist went on to say that people who had a strong reaction to PETA’s newest campaign should reflect on their diet.

‘Anyone who feels ashamed of guilty after watching this very sweet video needs to take some time to reflect about why that is,’ Jennifer said. 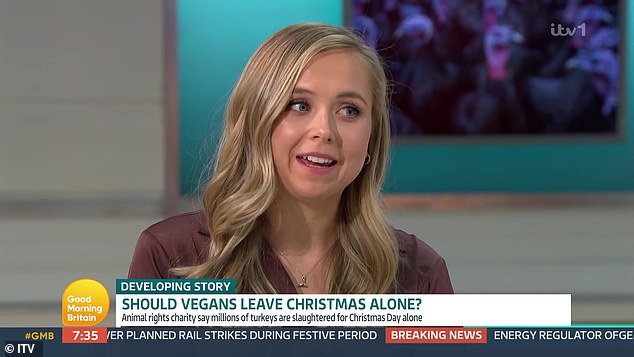 ‘I think it’s because they are starting to join the dots and realising it’s not just a piece of meat to serve up at dinner time,’ she added: ‘this is from a living being who had a desire to live, had family bonds and I would urgently tell anyone who does have those feelings to turn them into actions.’

When pressed by Susanna on whether she was judging and guilting people who eat meat to give up the meal, Jennifer argued: ‘I’m not making you feel guilty.

‘We also have hours of animal cruelty footage from British farms which show the reality for these animals. And if you cannot sit down and can’t stand watching that for more than a few seconds, then you should not be buying animal flesh,’ she added. 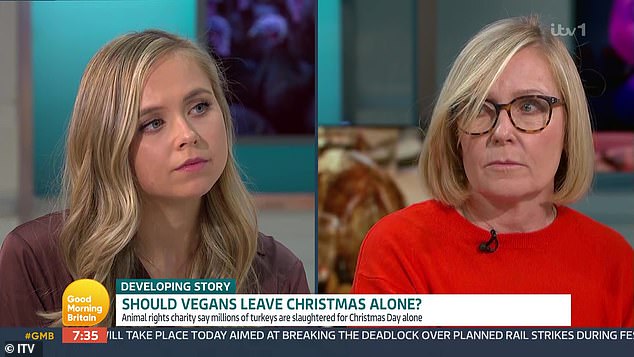 Sitting opposite Jennifer, Liz Webster, the chairman of Save British Farming, right, argued that eating turkey is more sustainable for the British farming industry, and that farming is less processed than some meat-replacement products

But Liz Webster brought the discussion back to the food chain, claiming that if the UK doesn’t farm animals, then ‘we don’t have the soil that we need and the fertiliser that we need.’

She added that food stocks in the UK have been hit by the decision to leave the European Union, because the UK is not receiving as much food from the EU as it used to.

‘We need food that’s locally produced and sustainable,’ she said.

‘Food that comes from animal is sustainable, they turn grass into protein, it’s healthier, it’s not processed,’ she added.

‘Yes, we farm animal, it is sad on the day on the day the animals go out. We feel sad, we love our animals, but if we didn’t farm them, they wouldn’t exist. And they have a job to do and there is a lot of by-product that comes from these animals.’ 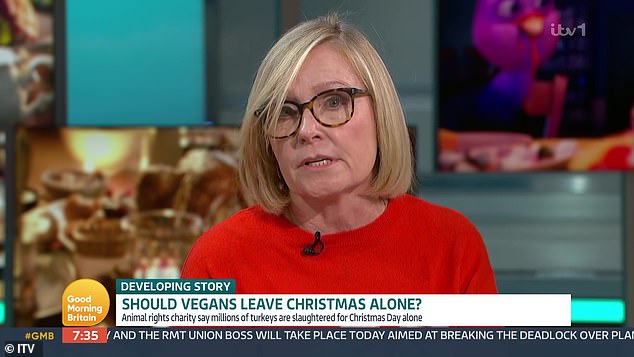 Liz said she is proud of being a part of British farming, and that the practice needs to be protected

Susanna Reid, who revealed she is a vegetarian, said: ‘I don’t criticise people for eating meat because it’s normal for human beings at the top of the food chain to eat those animals.’

However, Jennifer hit back, saying: ‘tradition is never an excuse. Just because something has been done for hundreds of years, it doesn’t mean it needs to continue.’

‘Animal should not be bred to be slaughtered, even if an animal had a great life on a farm, which we now is not the case because we have that evidence on our website.’

Liz argued that turkeys are an affordable Christmas meal options, but Jennifer countered they are ‘incredibly expensive’ and that vegan turkeys are cheaper.

We need more natural fertliser than ever, it’s so fundamental to growing food

‘I feel proud about using meat. We farm to such a high standard and we have farmed on this island since the Neolithic period and I feel proud to be part of that,’ Liz said.

She said the UK farms are better than ‘superfarms’ in other countries like the US or Brazil and that ‘we must promote British Farming.’

Jennifer said that PETA those support British farmers, but only those who grow crops.

She added that many people were touched by Toby’s story from the PETA campaign and bought Vegan starter kits as a result.

‘That’s all it takes to get that nostalgia and the taste of the traditional Christmas meal. You can have it without the cruelty,’ she added.

‘You can get a vegan turkey crown, a vegan pigs in blanket, vegan goose fat for roast potatoes,’ she added.

Meanwhile, Liz said that ‘food security is absolutely essential,’ and said it was her priority to guarantee the food supply via farming.

Watching the debate at home, viewers said they wished campaigners like Jennifer would stop telling them what to do.

‘GMB watching your Vegan turkey item, I couldn’t help but notice the lack of awareness of Palm Oils in the alternatives being promoted, nor the impact to millions of humans this therefore has, let alone the environmental destruction involved. Eat Veg not industrial slurry,’ one said.

”It’s the season of kindness & good will’ – so I’ll judge everyone who isn’t vegan & tell them how cruel & unkind they are! I do have vegan products for Xmas Dinner but also animal products too. Aren’t vegan meat products heavily processed? How does that help the planet,’ another said.

‘I have been vegetarian/pescatarian since the early 80’s and have never preached to others that they shouldn’t eat red meat or poultry and I will happily cook it for them. I eat some vegan offerings but I wouldn’t claim it is healthy like your guest. Much is highly processed,’ another wrote.

‘Personally I don’t eat meat and won’t be at Christmas however, I’ll be sharing my table with those that do. It’s up to the individual – people will eat what they want! I won’t be preaching, Christmas is a day to celebrate and be who you want – Christ we need it this year,’ another said.

What are Vegan Probiotics? And Do Supplements Help With Gut Health?

What are Vegan Probiotics? And Do Supplements Help With Gut Health?