But the 42-year-old heavyweight was recently busted chomping on chicken wings on the terrace of a London hotel, despite being a campaigner for animal rights charity PETA and launching his own vegan protein brand.

The number of vegans has quadrupled since 2014, with an estimated 600,000 of us choosing a plant-based diet and millions more reducing their meat consumption.

But sometimes the lure of a burger can just be too much. Here, four vegan women tell Samantha Brick how they cheated with meat like David. . . 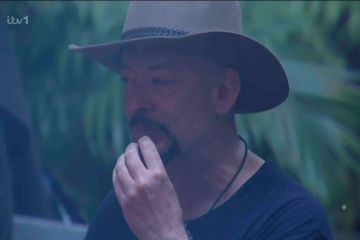 ‘I LISTEN TO WHAT MY BODY NEEDS’

NUTRITIONAL therapist Julie Silver, 54, is single and lives in Manchester. She says…

Working in the sphere of nutrition, I’ve learned to understand what my body needs.

Although I am an animal lover, my decision to go plant-based 20 years ago was because I wasn’t drawn to animal protein rather than a welfare concern.

I got very familiar with beans and lentils, and started holding workshops showing how to flavour them using different types of natural condiments, herbs and spices.

People were amazed at how something seen as bland could taste so good.

I rarely eat out as I’m not as keen on restaurant food – vegan menus usually aren’t great.

It was a couple of years ago that I first had a fancy that I needed some red meat.

I was cooking a grass-fed burger for a friend and I was salivating over it.

It hadn’t happened before but I felt like I really wanted and needed some.

I’ve also listened to my body on other occasions and had a bit of fish and eggs, but I can count on one hand the times that has happened.

And when I had some soft boiled organic eggs, they left me queasy.

Meat-eaters often hear the phrase “vegan” and think we’re all very extreme, but we’re not.

I call myself vegan as I prefer eating this way. But I don’t really like the labels – it creates an us versus them situation.

‘I LIED THAT MY CHICKEN NUGGETS WERE FAKE’

BARMAID Paris-Kay Wood, 25, is single and lives in Gillingham, Kent. She says…

After spending the first month of lockdown binge-watching The Kardashians and eating fast food, I decided to get healthy – and going vegan seemed the best way.

I’ve always felt a bit guilty about the animals who had to lose their lives to satisfy my burger cravings.

My mum’s reaction was predictably, “How long is this going to last?”.

But my nan was more encouraging as she’s vegetarian.

The trouble is, I don’t like vegetables. But I knew there were plenty of fake meat products out there.

I headed to the supermarket and was shocked by how expensive it was – £2.50 for five slices of artificial bacon compared to £1.50 for 20 slices of the real thing.

Nowadays I do prefer vegan meat products – even if they are pricey.

But nothing can replace the taste of McDonald’s chicken nuggets – and those have been my downfall.

In November 2021, I finished a shift at 2am and I was having a takeaway with my colleagues.

Normally I’d have a plant-based burger and be happy with that, but watching them eat proper meat sparked something.

On the way home, I went into Maccy D’s, ordered 20 nuggets and a burger and scoffed the lot. I didn’t even feel guilty.

Today, they are my guilty pleasure. I haven’t cooked meat or eaten things like sausages.

Instead, I sneak off alone to get my fill. Once a friend caught me but I lied and told her they were the vegan nuggets.

My mum still doesn’t know I’m a secret meat-eater. When she finds out, she’ll say, “I knew it!”.

I’m a very spiritual person and feel compassion towards all animals, not just my cat Misty or my cocker spaniel puppy Willow.

Why do they get to live a lovely life when many other animals don’t?

That’s why I stopped eating meat six years ago.

Going vegan pushed me into learning how to cook.

I loved making a veggie stew or a chickpea curry and I tried my best to cook from scratch, rather than use fake products – just because they’re vegan doesn’t mean they’re healthy.

But while my skin was better because of my diet, I gradually started to lack energy, suffered bloating and my periods were irregular.

Last autumn, my hair began to get really thin and fall out too.

I saw a spiritual nutritionist who recommended an old health remedy – chicken bone broth – and I made my first batch last winter.

It was a delight when I tasted it. It felt so nourishing and after regular portions, my symptoms improved.

I have continued on my vegan path but I’ve had to keep quiet about my medicinal use of meat.

My friendship group has lots of very spiritual people in it and many are vegan. I’m worried about what they will say.

But when I do eat my broth, I say a silent thank you to the animal. I respect it for giving me my health back.

‘I HAD CRAVINGS FOR CHICKEN WINGS WHEN I WAS PREGNANT’

MODEL Akira Scott, 28, has a one-year-old son and lives in North London. She says…

Coming from a Caribbean family with a predominantly meat-based menu, there was great surprise when I went vegan in 2016.

But I’ve never been one to blend in with the crowd and after watching a Netflix documentary on the topic, I was horrified at how animals are reared for our consumption.

I was unsure of what to cook at first, but I kept things safe with bean-based dishes.

There’s a Jamaican ackee saltfish dish I love so I just made it without the fish.

I taught myself lots of vegan meals and even my family and friends enjoyed them, although they’d eat it as a side to their meat dish when for me it was my main.

I enjoyed the lifestyle and became part of an online vegan group who meet regularly and go to vegan events.

At first, veganism wasn’t as popular and there wasn’t the fake meat market.

But I was doing really well sticking with it until I discovered I was pregnant in 2020.

I started getting cravings for chicken wings at three months that got increasingly strong.

At six months, I caved and asked my son’s dad to stop making the vegan meal he was preparing for me and cook chicken wings instead.

There was something about the texture, the spiciness and the crunchiness – they were really good.

I haven’t been able to go back fully vegan since, but I’m still keeping it on the down-low because my lovely group of vegan friends would be horrified.

I’m embarrassed about it but I’m only human and I’m cutting myself some slack.