Cannibal-themed “Bones and All” makes the ultimate case for veganism

A love story, and one with intriguing ethical questions of culture and class, “Bones and All” is  the acclaimed new movie from director Luca Guadagnino (“Call Me By Your Name”). Starring Timothée Chalamet and Taylor Russell as teenage cannibals on the run in the Midwest, it harks back to the likes of “Natural Born Killers,” “Badlands” or even “My Own Private Idaho.”

It is a lonely existence for “eaters,” as an elderly cannibal nicknames them. And yet, “eaters” are not monsters

Beneath the exposed, fragmented bones and the maraschino cherry-flavored blood spattering the mouths and chests of Lee (Chalamet) and Maren (Russell) is a plea for compassion. Based on a novel by vegan author and activist Camille DeAngelis, at its heart the movie and the book prompt us to question: “If we are so repulsed by humans eating their own flesh, why can’t we extend that revulsion to eating the flesh of any and all sentient beings?”

Soon after meeting, Lee and Maren seek refuge overnight in a slaughterhouse. It is eerily quiet without the daytime soundtrack: an industrial churn of machinery and the howls and cries of animals being shocked, stunned and slaughtered. Blue lights cast a calm, ghostly glow over the place and dark-eyed cows quietly shift about in their metal-fenced cells, seemingly oblivious to their fate. They are silent accomplices to Lee and Maren, who watch them from a railing above.

These two humans, driven by their appetite for human flesh, have been ostracized from society for their monstrous hunger. They cannot use their own names, nor work, nor have houses or cars. They can’t participate in any social norms that require proof of identity. All they have is one another.

There are no cannibals depicted in “Bones and All” who did not come from poverty, violence and addiction. Their need for flesh is an allegory for survival.

It is a lonely existence for “eaters,” as an elderly cannibal nicknames them. And yet, “eaters” are not monsters. There is a moral code amongst one another, and generally. They do not try to ingratiate themselves with other humans, seeking to kill and eat any human at a seemingly convenient time. They target older humans, those who might be close to dying or those who live very isolated lives. When Lee mistakenly seduces, kills and cannibalizes a man he first observes at a fun fair, assuming him to be a loner, only to realise that he is a husband and newly a father, there is a palpable sense of guilt, revulsion and grief in both Lee and Maren.

One of the most harrowing scenes is around a bonfire, when Lee and Maren have been accosted by two men – seemingly both “eaters.” It becomes clear, soon enough, that one of them – an off-duty policeman – is not a born cannibal. He has trained himself to eat the flesh and bone of humans out of a sexual or sadistic urge. He has attached himself to an “eater” in the form of a vile apprenticeship of sorts.

Why would he hunt, slaughter, and feast upon human flesh if he doesn’t need to?

And, if we the audience can be repulsed by that – and his evident choice to slaughter and eat flesh when there is abundant satiety that doesn’t cause violence, pain and loss – then perhaps we need to venture a little deeper into our own psyches and ask: Why would we feast upon flesh if we don’t need to? 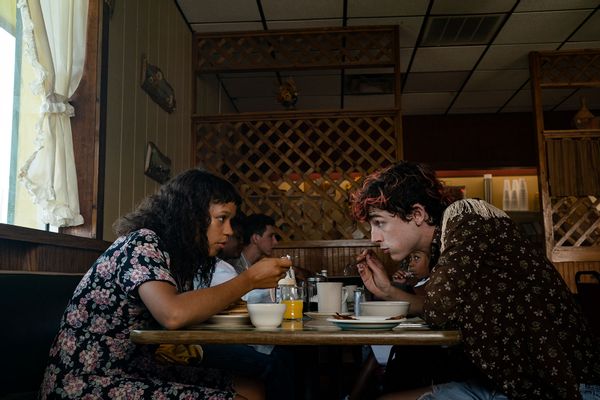 “Bones and All” is a love story, of course, but it poses a philosophical confrontation ultimately: Do we kill other fleshy creatures because we have to or because we don’t value their lives – and how do we justify that?

The travesty of genuine hunger is part of the answer.

Veganism is for those who can afford it, is the takeaway most of us are getting.

There are no cannibals depicted in “Bones and All” who did not come from poverty, violence and addiction. Their need for flesh is an allegory for survival, and the need to eat whatever is available (or to steal, sneak or hustle for essentials). Lee and Maren are driven by a need that is not sexual, nor sadistic, nor fuelled by a need to overpower and violate another human (like the horrifying Midwest cop); it is the need to survive.

Studies have shown, time and again, that poorer people eat meat in larger quantities because it is significantly more affordable than fresh fruit, vegetables or other forms of protein. A study by the University of Utah bore out these findings in 2020, revealing a clear link between lower socioeconomic status and meat consumption.

In our modern systems of industrialized agriculture, it is cheaper to fatten up animals in tiny, filthy pens and then to rely upon machines and cheap labor to stun, silence and slaughter them en masse than it is to grow protein-rich crops that provide all the nutrients and energy we need. Veganism is realistic, but it has become a tainted concept.

Celebrities have swapped their macrobiotic, ketogenic diets to champion “veganism” as their new fitness regime. Supermarkets boast colorful, hyper-expensive “vegan sausages” and “vegan mince.” Veganism is for those who can afford it, is the takeaway most of us are getting. But beyond the marketing messages, and the overly earnest celebrity rhetoric, it is a very pure and simple concept. And it is a choice.

Want a daily wrap-up of all the news and commentary Salon has to offer? Subscribe to our morning newsletter, Crash Course.

Lee and Maren, confronted by a lifetime of hiding out and running from authorities, leaving a trail of bloodied corpses and traumatized families, have an electrified confrontation midway into the movie. “What do you want, Maren?” Lee demands.

She wants them to rent an apartment, get jobs and live like normal people. For two people who have been abandoned by their families, never known stable incomes or dared to integrate into society, this humble desire seems idyllic.  They cook food (non-human), they read and smoke and hang out and work. They do not hunt and they wilfully do not kill.

That choice is a truth, and perhaps that’s the most fearsome aspect of “Bones and All,” in which Maren reflects: “The truth is like the waiting jaws of a monster, a more menacing monster than I’ll ever be. It yawns beneath your feet, and you can’t escape it, and as soon as you drop, it chews you to pieces.”

“Bones and All” is currently in theaters nationwide.

What’s Next for Vegan Seafood? 3 Startups Are Harnessing the Power of Mushrooms

What’s Next for Vegan Seafood? 3 Startups Are Harnessing the Power of Mushrooms