By Kumail Jaffer and Martin Beckford For The Daily Mail

Trading standards officials have been accused of insulting consumers’ intelligence after declaring war on almond milk in a clampdown on non-dairy product branding.

Britain is set to force producers to reclassify thousands of food items – including those whose names play on being non-dairy – over fears consumers might mistake them for dairy products.

Such rules – which have already been rejected by the European Union – would mean almond, soy and oat milk would have to be renamed, as would the vegan spread I Can’t Believe It’s Not Butter.

Britain is set to force producers to reclassify thousands of food items, including those whose names play on being non-dairy, over fears consumers might mistake them for dairy products

But the Plant-Based Food Alliance lobby group said: ‘Households… just want to be able to access the products they are used to easily without unelected officials removing them from supermarket shelves or forcing labelling changes. This will hit businesses who produce plant-based products hard and impact consumers who buy these products for health, environmental or ethical reasons.’

A summary of the submitted proposal, seen by the Daily Mail, claims it ‘seeks to ensure consistent and clear…differentiation between dairy and plant-based products.’

Officials claimed ‘product descriptions such as ‘vegan cheese’, ‘plant-based yogurt’, ‘yogurt-style’ or ‘cheddar-type’ mislead consumers. There are only two exceptions – when the product has a traditional name that refers to dairy, such as cream crackers, or if the use is descriptive – such as buttery or creamy. Attempts have already been made in Washington and Brussels to impose the restrictions on vegetarian alternatives. In 2021 the European Parliament rejected them after months of campaigning by consumers and companies. 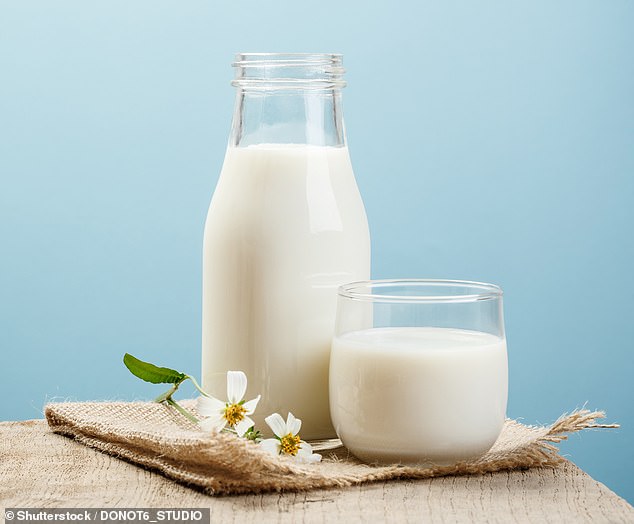 A summary of the submitted proposal claims it ‘seeks to ensure consistent and clear…differentiation between dairy and plant-based products’. [File image]

In the US, companies have attempted to circumvent the ban by using the terms ‘Mylk’ or ‘M*lk’, or even ‘Not Milk’.

But in the proposals submitted to Defra, such names would also be banned.

Stephanie Holmes, speaking for Upfield, the company behind spreads such as I Can’t Believe It’s Not Butter, said: ‘This is totally out of keeping and out of touch with the way people act on a day-to-day basis.

Britain faces possible milk shortages in the second half this year.

There are fears that the price of milk could fall below the cost of producing it, which could force dairy farmers out of the industry.